How liberals used the Kennedy assassination 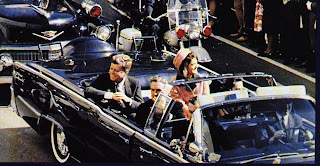 George Will has a fascinating essay on the transformation of liberalism following the assassination of JFK.


A must read. Will points out that liberals bizarrely used the assassination to beat up conservatives and ordinary Americans, introducing the trope that it was conservative America's penchant for violence that killed JFK.

An odd assertion, given that JFK was murdered by a leftist who hated America.

As a kid I remember the frequent assertions in the media that the JFK assassination was an indictment of ordinary Americans (read: conservatives) and their violent ways. Even then I though it odd: wasn't Kennedy killed by a communist, exactly the sort of person ordinary conservative Americans disdained and liberals incessantly excused or even defended?

A few years ago, I visited The Sixth Floor Museum while on a trip to Dallas with my youngest daughter. I was surprised, and annoyed, by the frequent displays in the museum about anti-Kennedy statements by conservative groups in the lead-up to the assassination. The fact is that none of these conservative protesters had anything whatsoever to do with the assassination, and it was a communist-- just the kind of guy who these protesters detested-- who killed Kennedy. Why weren't there displays about the Left's solicitude for communism, which allowed a traitor like Oswald to return to the U.S. from the Soviet Union and to act with impunity when he returned, hawking political viewpoints (e.g. support for Castro) that were fashionable in all the liberal salons?

One hallmark of the Left was expressed nicely in an aphorism by Rahm Emmanuel, the murderously incompetent Democratic mayor of Chicago. When he was Obama's chief of staff, he said, referring to the political uses of the economic meltdown, "never let a good crisis go to waste".

Even the murder of a president by a leftist is useful to the Left, as Will points out.
Posted by mregnor at 6:00 AM