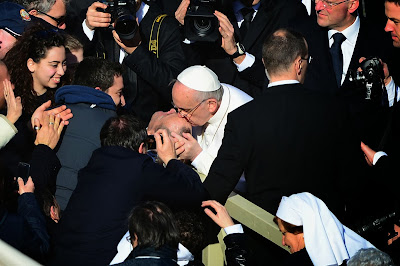 Christopher Orlet has a fine essay about conservative criticisms of Pope Francis.

As you may have noticed, I'm a pretty conservative guy, in matters religious as well as political and cultural.

But I think that the conservative panic over the Holy Father is misguided. Nothing the Holy Father has said is a deviation from the Magisterium; his statements are right out of the Catechism. And his history in Argentina is certainly not one of a liberalizing loose cannon. The lefties and socialists there hated him, and the more left-leaning members of the Jesuit order distrusted him. There was plenty of leftie calumny spread about him on the occasion of his election. He was and is orthodox like his namesake, St. Francis. St. Francis, like Pope Francis, realized that our Lord shocked the entrenched power-brokers of His time. Any reader of the New Testament is struck by this fact: the Lord excoriated the Pharisees, the elites of His day, and had a beautiful tenderness for the more base sinners-- the prostitutes and tax-collectors.

I love the parable of the two sons in Matthew 21, in reply to the chief priests and elders who asked Him questions to lay a trap for Him:


The Parable of the Two Sons

“There was a man who had two sons. He went to the first and said, ‘Son, go and work today in the vineyard.’

“‘I will not,’ he answered, but later he changed his mind and went.

“Then the father went to the other son and said the same thing. He answered, ‘I will, sir,’ but he did not go.

“Which of the two did what his father wanted?”

“The first,” they answered.


The Holy Father is reminding us that the Christian life is a radical life. It is humility before God-- true repentance-- which is central to salvation. It is often the poor in spirit and the meek and baser sinners who understand their sin and understand their need for God, more so then the powerful and comfortable.

There's an anecdote about St. Francis that describes what Pope Francis is up to. From Walter Russel Mead:


G.K. Chesterton tells the story of the time that St. Francis of Assisi visited Rome and the pope of the day proudly showed him all the wondrous treasures of the Vatican. Referring to a story in the Biblical Book of Acts in which St. Peter spoke with a beggar in Jerusalem and told him he had no money, the pope pointed to the treasures around him and said, “Peter can no longer say ‘Silver and gold have I none.’”

St. Francis’ response: “Neither can he say, ‘Rise up and walk.’”

Pope Francis, at the movement of the Holy Spirit, is setting the Church on fire, like the fire at Pentecost. All of the traditional conservative passions are included in this fire-- love for holiness, love for the unborn and the handicapped, love for the Church and Her magnificent tradition. But Pope Francis' fire, like St. Francis' fire, is a call to spiritual renewal as well.

I pray that my fellow conservatives in the Church do not react to Pope Francis like the liberals in the Church reacted to John Paul II and Benedict, with calumny and spite. Our Holy Father is, I think, a blessing. He is reminding us of our Lord's mercy and love for the humble and for the suffering.

Pope Francis is a gift of spiritual fire to us and to our Holy Church.
Posted by mregnor at 6:00 AM