Imagine... a world without organized atheism 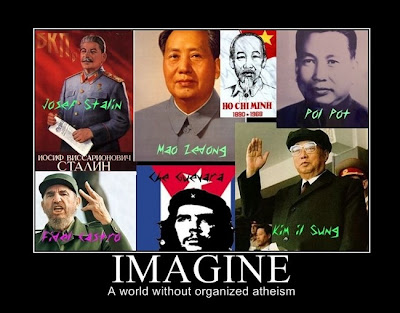 What the godless fans of John Lennon always seem to forget is that there is a well-known place where there are no countries, no religion, and nothing to kill or die for. It is a very peaceful place, at least when seen from this perspective. It is called "the grave". And it is no accident that so many people end up there every time a utopian - who is often an atheist, but doesn't have to be - puts himself in a position of power where he can attempt to build a New Man, a New Society, or a New World Order.

It's not atheism that causes this lethal utopianism. But the observable fact of the matter is that atheists are particularly susceptible to it.

That correlation is one reason I take no prisoners in discourse with atheists. I don't care what they tell me they are. I can see what they've done.

Why is atheism so murderous? Vox' assertion that "it's not atheism that causes this lethal utopianism" is very important, and this observation, rather than letting atheism off the hook, is the philosopher's stone in explaining atheism's invariable lethality.

Why is atheism so murderous? The same reason AIDS is more deadly than typhus.

Atheism weakens that ability of a culture to protect itself from evil, like a virus that destroys the immune system, and it lets all kinds of evil flourish.

Atheism is a disease that kills your civilization by leaving it defenseless against all manner of evil.
Posted by mregnor at 6:00 AM