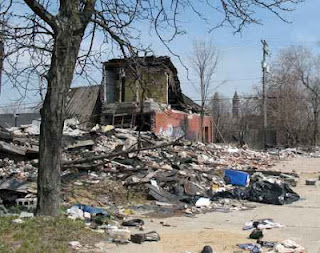 From Kevin Williamson at National Review:

One lesson to learn from Detroit is that investing unions with coercive powers does not ensure future private-sector employment or the preservation of private-sector wages, despite liberal fairy tales to the contrary...

The second important lesson to be learned from Detroit is that there are hard limits on real tax increases... tax increases are sure to have real-world effects on everything from investing to immigration. At some point, the statutory tax increases will not increase actual revenue.

The third lesson is moral. Detroit’s institutions have long been marked by corruption, venality, and self-serving. Healthy societies have high levels of trust. Who trusts Detroit? This is not angels-dancing-on-the-head-of-a-pin stuff. People do not invest in firms, industries, cities, or countries they do not trust. Corruption makes people poor.


Detroit is liberal Democrat government, distilled and clarified, put on display for all to see. We need to take note.

We need to vote these leftist-Democrat gangsters out.
Posted by mregnor at 6:00 AM