"Thank God for the atom bomb"? 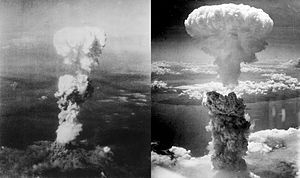 Libby Sternberg has a fine post in which she uses the passing of writer Paul Fussel to reflect on the agonizing decision in 1945.

Were we right to drop the atomic bombs on Hiroshima and Nagasaki?

The justifications for doing so are strong. We insisted on unconditional surrender and occupation of Japan, which was a reasonable insistence, given our experience with a resurgent Germany following WWI. Yet Operation Downfall (the planned invasion of Japan) would have entailed almost inconceivable numbers of casualties. There would have been between a half-million and a million American and allied battle deaths. Upwards of ten million Japanese would have died, mostly civilians, not only from battle but from starvation and disease caused by the quarantine of the Japanese islands. Furthermore, mass killing of Japanese civilians was already underway. The saturation bombing of Japanese cities with conventional bombs had already killed several times the number of civilians who were killed in the atomic bombings. And Japan was unequivocally the aggressor in the Pacific war. Our participation in the war was a just reaction to aggression.

My father was a gunner on a bomber in the Pacific war, and would have been involved in the invasion of Japan. He may not have survived. He was a member of the occupation forces after the Japanese surrendered, and he developed a life-long love and respect for the Japanese people. Yet he told me that he supported the atomic bombing, as a tragic but necessary way to save Japanese and American lives.

The arguments in defense of dropping the atomic bombs on Japanese cities are clear and credible.

Yet they are utilitarian, and it is there that I disagree.

The problem with the atomic bombing of Hiroshima and Nagasaki is that civilians were the deliberate targets. That is also the problem with the conventional bombing of Tokyo and Yokohama and Toyama and Dresden and Frankfort and Cologne. And of course deliberate targeting of civilians was done in the bombing of London and Warsaw and Frampol and Rotterdam. Destite the yawning ethical gulf between the Allies and the Axis, both sides targeted civilians. Did targeting of civilians achieve military goals, that would otherwise be considered defensible? Sometimes yes (Hiroshima and Nagasaki). Sometimes no (London and Dresden).

The ethical breech is this: it is never ethical to do evil (intentionally kill civilians) in order to do good (win a war).  The magnitude of the good is irrelevant. For example, one may not save ten lives by killing an innocent person and harvesting all of his organs for transplantation. If the innocent person were to die accidently, it would of course be ethical to transplant his organs (with consent). But it would never be ethical to kill him in order to obtain his organs, regardless of how many lives would be saved.

Therein lies the problem with utilitarian ethics. It seduces us with an obvious good (organ transplantation or avoidance of battle deaths) by enticing us to commit evil.

If the evil is an unintentional and unavoidable by-product of the effort to do good, then the act may be ethical (principle of double-effect). If a pregnant mother has cancer, it is ethical for her to receive chemotherapy, even if it may kill the unborn child, because the intent is to save her life and the death of the child would be unintentional and unavoidable. If, on the other hand, the mother had eclampsia (high blood pressure and seizures associated with pregnancy), it would be unethical to abort the child, because killing the child is then intentional. It is never ethical to do evil as a means of doing good. This is the principle of double-effect, which is at the core of Catholic ethical teaching. An evil means never justifies an end.

The same applies in war. It is never ethical to intentionally kill non-combatants. Even the killing of combatants is ethical only if the purpose is to stop the enemy nation from doing evil, and no other way of doing so is feasible. Killing enemy soldiers out of revenge or hate is unethical. If civilian deaths in war cannot be avoided, the unintentional killing of civilians during a legitimate military engagement may be a tragic but defensible act. But the targeting of civilians with the intent of using that targeting to influence the course of the war is never ethical.

I will not make excuses here. Rejection of utilitarian ethics often means measurably worse outcomes. The refusal to condone torture of captured terrorists to obtain information is a clear example. It is undeniably true that torturing terrorists to gain information can save lives. Opponents of such torture have a responsibility to own up to the fact that acting on principle may cost other people their lives. The atomic bombing of Hiroshima and Nagasaki had the utilitarian effect of saving millions of lives. And I have great respect for the leaders who made these agonizing decisions.

I admit that if my moral view against the atomic bombing of cities had prevailed, many more people would have likely died in the ensuing invasion, including innocents. But some things are just wrong, regardless of consequences. Utilitarianism is deeply flawed ethics.

Targeting civilians in war is always and everywhere immoral. It was certainly immoral in World War II.