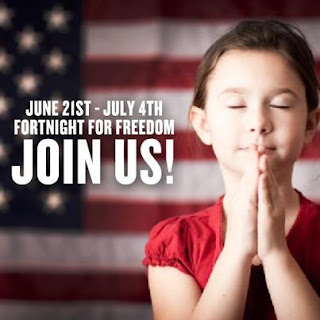 The United States Conference of Catholic Bishops have announced the Fortnight for Freedom Campaign, which began June 21 and will run to July 4th.

From the United States Conference of Catholic Bishops:

The fourteen days from June 21—the vigil of the Feasts of St. John Fisher and St. Thomas More—to July 4, Independence Day, are dedicated to this “fortnight for freedom”—a great hymn of prayer for our country. Our liturgical calendar celebrates a series of great martyrs who remained faithful in the face of persecution by political power—St. John Fisher and St. Thomas More, St. John the Baptist, SS. Peter and Paul, and the First Martyrs of the Church of Rome. Culminating on Independence Day, this special period of prayer, study, catechesis, and public action will emphasize both our Christian and American heritage of liberty. Dioceses and parishes around the country have scheduled special events that support a great national campaign of teaching and witness for religious liberty.


Freedom of Religion is our first freedom, given place of priority in the First Amendment. Free exercise of religion means the freedom of individuals and organizations to act in accordance with their conscience as formed by their religious precepts. It is an unalienable right. It is now under assault, most notably by the Obama administration's demand that religious institutions and private businessmen offer contraceptive and abortifacient coverage to their employees. It is a clear violation of human rights and of the First Amendment.

The Fortnight for Freedom campaign the nation’s Catholic bishops started against the Obama HHS mandate, which forces religious groups to pay for abortions and birth control drugs for their employees, begins Thursday.

The United States Catholic bishops are readying American Catholics for what may be the largest campaign of civil disobedience since the Civil Rights Movement of the 1960’s. In addition to 12 lawsuits against the Obama Administration including 46 plaintiffs from dioceses, hospitals and universities, the US Catholic bishops are urging Catholics to openly defy the Obama HHS Mandate.

The USCCB is distributing bulletin inserts nationwide, which reference Dr. Martin Luther King, Jr. and his call for civil disobedience in response to unjust laws.

According to the USCCB, “Bishops in their own dioceses are encouraged to arrange special events to highlight the importance of defending religious freedom. Catholic institutions are encouraged to do the same, especially in cooperation with other Christians, Jews, people of other faiths and all who wish to defend our most cherished freedom.”
John Jansen of the Pro-Life Action League urges everyone to participate and commended the Catholic bishops for leading what is not a Catholic-only fight.

“The U.S. Bishops have been steadfastly outspoken against the HHS Mandate’s assault on religious freedom, and their leadership and messaging has been widely praised by Catholics and non-Catholics alike,” he said. “As part of their response to the HHS Mandate, the United States Conference of Catholic Bishops (USCCB) has called for a Fortnight for Freedom—a time of prayer, education and action on religious freedom from June 21 to July 4.”

“We wholeheartedly support the Fortnight for Freedom, and we encourage you to take part,” he added.

Eric Schiedler, of the Pro-Life Action League, stressed the election component of the event.

“As we approach the crucial elections in the fall all people of faith must make it clear to our leaders that we will not allow our religious freedom to be compromised,” he said.
Matt Smith, President of the Catholic Advocate, also urges people to get involved.
“It doesn’t matter if you live in Alaska, Montana, Florida, or Maine – you’ll be united with concerned citizens from all over America for 14 days of prayer, education, and action in support of religious liberty,” he said.

Smith said people can get involved without having to leave their homes, such as with his group’sVirtual Vigil for Religious Liberty.

“There are many ways for you to answer the Bishops’ call during the Fortnight for Freedom without leaving your home. There will be dozens of opportunities for you to get involved including: contacting your members of Congress to demand they vote in favor of legislation that defends religious liberty; sharing facts with your family and friends on Facebook and Twitter; joining fellow Catholics and people of faith in special prayers; and participating in many other activities to support our efforts defending religious liberty for all Americans,” he said.

“The bishops have urged us all to consider the ‘Christian and American heritage of liberty’ during this time, and we think participating in our virtual vigil is one great way for people of faith from across the United States to come together,” Smith added.
“Our goal is to unite those standing for our liberties in a national way by their attendance at the virtual vigil in Washington, D.C.,” added Smith. “We also encourage participation in the various activities being hosted in dioceses across the country but for those unable to attend an event they can be a part of the fortnight through the vigil.”

Brian Burch of CatholicVote.org, also urged people to join the cause together.

“The Fortnight for Freedom is a powerful nationwide campaign launched by our Catholic Bishops. They are asking you and me to pray, study and engage in civil and responsible public action. The Fortnight is in direct response to the notorious HHS mandate that would compel all Catholic hospitals, charities and schools — and all private businesses — to provide health services in direct contradiction to Church teaching on human life,” he said.

In addition, the Family Research Council has called for Two Weeks for Freedom,” a call for cooperation between all Christians in the fight for religious freedom.


Catholics and our Christian brethren have enormous power in this country. We have allowed a coterie of thugs to violate our Constitutional rights. The contraceptive/abortifacient mandate is merely the most recent instance of denial of rights to Christians. We have been censored in schools, in our public places, and punished for acting in accordance with our religious beliefs.

We are finally waking up to what is happening. We have enormous political power. Aside from the impact of a couple hundred million Christians in America organizing and working in concert to protect human rights and advance a Christian understanding of rights and justice in our laws, the Catholic vote (a quarter of all voters) is decisive in many of our elections at both the local and federal levels. In presidential elections, every candidate since 1952 who lost the Catholic vote lost the election (except Clinton in 1992).

Fifty four percent of Catholics (shamefully) voted for Obama in 2008. Millions of those Catholic voters won't make that mistake again.