On the 50th anniversary of the school prayer ban 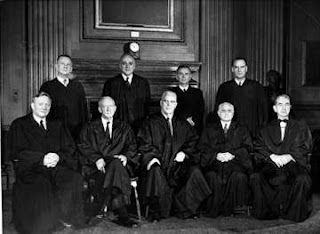 Peter Smith has a reflection on the 50th anniversary of Engle v. Vitale, the Supreme Court decision that banned prayer in public schools.


Today marks the 50th anniversary of one of the landmarks in that case law — Engel v. Vitale, in which the U.S. Supreme Court ruled that school-sponsored prayer in a New York school district amounted an unconstitutional establishment of religion.
The prayer said:

“Almighty God, we acknowledge our dependence upon Thee, and we beg Thy blessings upon us, our parents, our teachers and our country. Amen.”

A year later, there followed the decision (in which famed atheist Madalyn Murray O’Hair was involved) banning school-sponsored devotional readings of Scripture. Later court precedents kept curtailing publicly endorsed expressions — including more recent ones banning student-led prayers at football games, Ten Commandments postings and the teaching of creationism as science. At the same time, such precedents have allowed students to meet voluntarily in Bible clubs and have “See You At the Pole”-type prayer activities.

Justice Hugo Black wrote the majority decision in Engle. Black rose to prominence in the Democratic Party as a cappo of the Alabama Ku Klux Klan, where he was Grand Kleagle for recruitment. He began his political career by providing pro-bono (and successful) legal representation with acquittal to a man who shot an unarmed Catholic priest to death. Black brought the Klan slogan "wall of separation of church and state", which was Klan-speak for "no Catholics or dogs allowed", into Supreme Court jurisprudence, an arena in which the unconstitutional "wall of separation" slogan of nativists had been notably absent since the nation's founding.

“There can, of course, be no doubt that New York’s program of daily classroom invocation of God’s blessings as prescribed in the Regents’ prayer is a religious activity. It is a solemn avowal of divine faith and supplication for the blessings of the Almighty.”

“…The constitutional prohibition against laws respecting an establishment of religion must at least mean that in this country it is no part of the business of government to compose official prayers for any group of the American people to recite as a part of a religious program carried on by government.

Prayers have been composed by government officials at all levels of government at all times past and present, and will be composed in the future. Our monuments and speeches and national documents are slathered with God-talk. Our country is unrecognizable without it. The Declaration of Independence specifically attributes our rights to our Creator, and the Constitution specifically cites the Declaration as the founding document of our nation. The Constitution dates itself as being written in the 12th year of the independence of the United States of America-- that is, it dates itself to 1776.

The first official action of this nation declared the foundation of government in these words: "We hold these truths to be self evident, that all men are created equal, that they are endowed by their Creator with certain unalienable rights, that among these are life, liberty, and the pursuit of happiness. "While such declaration of principles may not have the force of organic law, or be made the basis of judicial decision as to the limits of right and duty, and while in all cases reference must be had to the organic law of the nation for such limits, yet the latter is but the body and the letter of which the former is the thought and the spirit, and it is always safe to read the letter of the Constitution in the spirit of the Declaration of Independence. No duty rests more imperatively upon the courts than the enforcement of those constitutional provisions intended to secure that equality of rights which is the foundation of free government.


“… Neither the fact that the prayer may be denominationally neutral nor the fact that its observance on the part of the students is voluntary can serve to free it from the limitations of the Establishment Clause. … When the power, prestige and financial support of government is placed behind a particular religious belief, the indirect coercive pressure upon religious minorities to conform to the prevailing officially approved religion is plain. But the purposes underlying the Establishment Clause go much further than that. Its first and most immediate purpose rested on the belief that a union of government and religion tends to destroy government and to degrade religion.”

The Establishment clause prohibits an official federal religion, like the Church of England. A voluntary prayer in a school is not an official federal religion. Those who don't want to pray are free not to. They have no right to censor the prayers of others. Black's Establishment Clause jurisprudence is bigoted pap, unmoored to any history or scholarship or jurisprudence. Perhaps the eyeholes in his hood were too small to read through.

Smith quotes Justice Potter Stewart, the only dissenter in Engle:

“With all respect, I think the Court has misapplied a great constitutional principle. I cannot see how an ‘official religion’ is established by letting those who want to say a prayer say it. On the contrary, I think that to deny the wish of these school children to join in reciting this prayer is to deny them the opportunity of sharing in the spiritual heritage of our Nation.”

I agree with Stewart, except for the "respect" part. No respect is due to those who use misrepresentations of the Constitution and of our nation's history as a cudgel to crush prayer and reference to God in our civic life. The only motivation for doing so is hate.

Those who ban prayer were, and are, hooded bigots.
Posted by mregnor at 6:00 AM