The war on DDT has faces

Faces you won't see on a Sierra Club calendar. 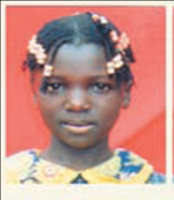 
Fina’s little body shook for hours with teeth-chattering chills. The next day her torment worsened, as nausea and vomiting continued even after there was nothing left in her stomach. Finally, her vomiting ebbed and chills turned to fever, drenching her body in sweat. Then more chills, fevers, nausea, convulsions, and constant, unbearable pain in every muscle, bone and joint.

She cried out, and tears mixed with sweat. But no one could help her. She had no money for doctors, medicines or a hospital room. She didn’t even have a mother or father to comfort her. All the orphanage school staff could do was caress her, pray and hope she’d get better – and wait for her to die.

And in agony that never stopped from the time the malaria first struck her down, Fina Nantume did die. So did 49 of her classmates, out of 500 students in the APEA Primary School for orphans in Kampala, Uganda, in 2005. Most of the survivors were also afflicted with malaria at least once that year. Some became permanently brain damaged. Others died in subsequent years.

Then why did they? Why does half the world’s population remain at risk of getting malaria? Why are some 250 million people infected annually – with 90% of the agonizing chills, fevers, nausea, brain damage and death occurring in sub-Saharan Africa?

It’s said malaria is a disease of poverty, and poor countries don’t have enough funds,doctors or medicines to treat the disease – or prevent it in the first place. True enough. But malaria is also, and much more so, a disease of callous, intransigent environmental extremism and wanton disregard for human life. A disease whose prevention is hampered, and actively thwarted, by pervasive opposition to mosquito-killing insecticides, and mosquito-repelling DDT...

The “net” effect of these bald-faced lies is that anti-pesticide zealots are perpetuating poverty, misery, disease and death in malaria-endemic regions all over the world. Safe in offices made malaria-free by the very chemicals, technologies and prosperity they deny to others, these baby killers and their financial benefactors are violating the most basic human rights of people in poor nations: the right of access to technologies that enhance and safeguard life.

Paul Driessen is a policy advisor for the Committee for a Constructive Tomorrow and for the Congress of Racial Equality. He is author of Eco-Imperialism: Green power- Black death.

Dr. Robert Novak is a professor of medicine at the University of Alabama at Birmingham who has devoted much of his life to combating malaria.


Fina Nantume was an orphan at the APEA Primary School in Kampala, Uganda. Here is a collage of the 50 children-- Fina's classmates-- who died from malaria at the APEA school in 2005.