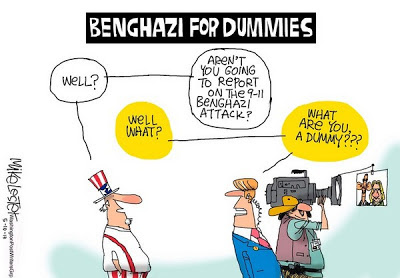 The title of the post is a pun (for you liberals).

You may have noticed that I haven't posted much lately on the Benghazi scandal. Every hour there seems to be new revelations, and the truth is really coming out. If I tried to keep up, I'd be posting every hour.

This we know: our people weren't protected, and were abandoned to die, without an effort at rescue, probably because a big rescue effort would have undermined the pre-election Democrat spin that Al Qaeda  was no more and that the Libyan revolution was a big win for the U.S.

So the scumbags in the Obama Administration decided that they had to blame the murders on an irrelevant idiot You Tube video. They hustled the hapless "culprit" off to jail, in front of the world media, just like they do in totalitarian countries.

It's important to establish all of the truth, for future historians. For now, none of this matters really, unless you just like hearing the truth once in a while.

If you're looking for good honest sources for the Benghazi hearings, Hot Air, Drudge, Real Clear Politics, and Instapundit are doing a great job.

That said, Obama and his hacks will pay no price in the foreseeable future for Benghazi and for their lies, which is an impeachable offense that dwarfs Watergate. Why will there be no consequence?

Watergate? Gimme a big league break here. There’s a HUGE difference between 0bama’s problems with Benghazi and Nixon’s Watergate mess. When the Watergate scandal broke we had a New York and D.C. press corps with a burning desire to destroy Richard Nixon.

With 0bama and the Benghazi scandal we have the very same press corps ready to do anything it can reasonably expect to get away with to protect their God-like hero and preserve his presidency. “But people died in Benghazi!” you say? And you think that’s enough to stop the 0bama hero-worship among the Fourth Estate?

But what about the American people? Really? Think about that for a few moments. Now … you’re not telling me that the same people who put this colossal failure back into the White House for four more years is going to get worked up over Benghazi, are you?

Let me tell you what the American people are concerned with right now – and we’re talking about those who aren’t gunched up with 24/7 discussions about college football recruiting and gay NBA players. In a nutshell (and thank goodness for the few exceptions we DO have) the majority of the American people are more worried right now about acquiring and keeping their monthly checks from the government than they are about 0bama’s lies or foreign policy failures. They think a Benghazi is a small yappy dog.

These people are more concerned about next Winter’s home heating assistance checks than they are about dead ambassadors. They’re worrying about getting more federal dollars for child care to help them take care of the next tricycle motor they’re fixin’ to download without the benefit of a husband. They’re wondering who is going to pay their medical bills, and how they can get their hands on one of those great Section 8 housing vouchers. Some are looking to upgrade their 0bamaPhones.

How many people do we have on Social Security disability right now? The figure is nearing 12 million Americans. These 12 million are principally worried about how to keep those checks coming, while another 12 million (at least) are wondering how to get on this bandwagon as well. After all, their backs hurt and you surely can’t expect them to get out there and work for a living, can you? (Apologies to those of you with actual disabilities, but we could probably cram every one of you into a Jai Alai Fronton somewhere in Miami if we had to.)

Then there’s millions more who’s main concern is making sure their unemployment benefits don’t run out (Me? Get a job?) and others who are waiting for 0bama to make their boss pay them more than they’re actually worth on their jobs.

Benghazi 0bama’s Watergate? For that to happen you need concerned citizens who actually care and a media that will do it’s job objectively. Both ingredients are in short supply.

It’s going to be a great show, to be sure. But in the end it adds up to nothing.


As long as the welfare checks and foodstamps and Obamaphones and new seasons of Honey Boo Boo keep coming, the American electorate cares not a wit about Benghazi. Who gives a shit about honest government, when the number of (fat) Americans getting freebies from foodstamps exceeds the population of Spain?


"When the people find they can vote themselves money,
that will herald the end of the republic."

Bread and circuses are the endpoint of the American experiment in self-governance. When you understand that Benghazi occurred after the era of American self-governance, it makes sense.
Posted by mregnor at 6:00 AM