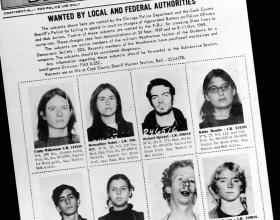 Peter Collier has a must-read essay on Bill Ayers and the Weather Underground.

Progressives with Bombs; the whitewashing of the Weather Underground


I was a teenager when a lot of this stuff was going on, and I remember the violence and the fear. These people were and are monsters. They failed (temporarily) where Lenin succeeded, and what they would bring to our country if they had succeeded would have been what Lenin brought to Russia.

Every one of them is a criminal, and every one of them should be in prison. The fact that they are not, despite their very public and self-confessed crimes (how many bombings do you have to confess to publicly before you are prosecuted?), leaves me dismayed, confused, and almost fearful.

They weren't prosecuted, and still enjoy astonishing prestige, because they won, in a partial but important way. Their spawn occupy the Oval Office, and run the Justice Department and the IRS.
Posted by mregnor at 8:41 AM