Obama: "We vow to prosecute Chechen terrorists, and offer them a two-state solution" 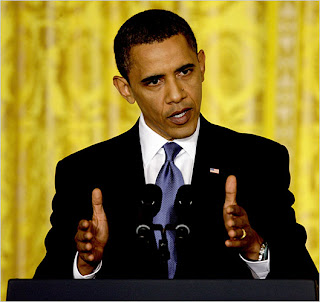 (Dissociated Press) President Obama announced today at a press conference that he intends to prosecute all the Chechen terrorists responsible for the Boston marathon bombing, and offer them the eastern half of the United States.

"We must not let this derail the peace process" the President intoned, pounding his fist softly on the podium. "The only path to peace in this conflict is compromise and mutual respect. Everyone-- especially Chechens-- has a right to self-determination."

The President insisted that the United States must abide by the same rules it lays out for its allies around the world.

"The road to peace with Chechnya is a long one, and we must not allow spontaneous man-caused disasters to derail our struggle for co-existence."

The President apologized to Chechens for the American settlements east of the Mississippi "which violate international law", and vowed to sit down at the negotiating table with the militants responsible for the Boston bombings.

The President has also promised not to allow the bombings to halt the billions of dollars in aid that the United States plans to send to Chechnya. "It's important the we keep the doors to peace open", the President said.
Posted by mregnor at 6:00 AM