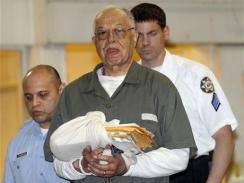 Kermit Gosnell was convicted of first-degree murder and will serve life in prison.

His atrocities will reverberate. Gosnell is poison to the pro-abortion movement, and they will spin it, as they are already doing. I don't think they'll get anywhere with the spin, but they'll do as much damage control as they can.

I'd love to see congressional hearings on the abortion industry. We on the pro-life side need to make sure that as many people as possible understand that Gosnell is no out-lier. What Gosnell did is what abortion is.

I'm glad he didn't get death. He deserves death, and much worse. But we all deserve worse than we get.

There's already been too much killing.
Posted by mregnor at 6:00 AM