Fascism, Balkanization, and the Islamization of Europe 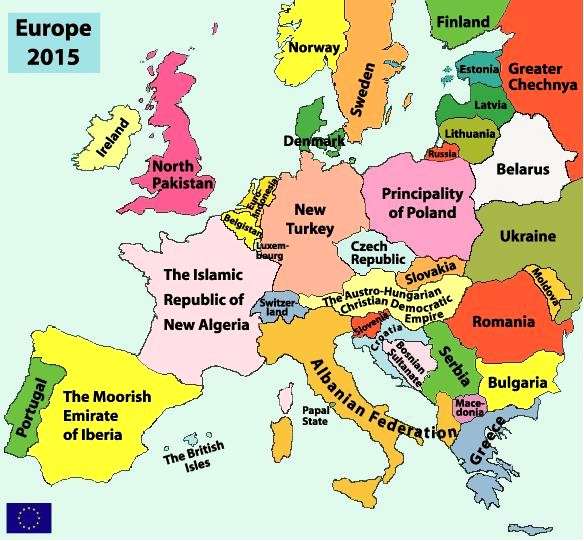 Commentor crusadeREX raises an excellent point about the approaching Islamization of Europe:

Mike,
I agree on 95% of this issue, but there is an area of possibility you have not explored: Fascism.
There is a distinct possibility of a massive European backlash before the Islamization reaches a critical mass.
I am not suggesting this would be a 'good' thing, merely that it could counter the waves of Islamic thinking and replace it with a different dystopian nightmare.
I have often wondered if that could be the motive/gamble for some of the more Nietzsche inclined minds in the 'secular progressive' camp.
A study of the effect of the Conquest of Iberia, and the subsequent reconquest and Crusades, shows clearly just how single minded the European mind can be when it comes to territory; and just how quick normal people can be militarized over an ideal.
The Nazis would be a far more modern example.
While I agree on the notion of the "speed bump", I think there is still room for a horrible backlash that would make the second world war look like a kid's party.
Either way it does not bode well for Western Civilization

I agree. I think that there are 5 possibilities for the future of Europe:

1) Peaceful co-existence between Islam and the West in Europe. I doubt it. Islam is a profoundly intolerant ideology, and historically the only substantial peace in regions with a significant Islamic presence has been following Islamic conquest and the reduction to dhimmitude of the locals, who pay taxes and obey the Caliph. It worked in Palestine from 700- 1100 A.D. Ironically, once Muslims make up the majority, violence starts again, against other Muslims or with anyone who has the misfortune of sharing a Muslim border. (c.f. Samuel Huntington's observation that Islam always has "bloody borders".)

2) Peaceful reestablishment of Christian culture by the peaceful emigration of Muslims. Not likely. They ain't leavin'.

3) Balkanization: Perhaps the most likely outcome, with islands of Muslim and Christian/secular hegemony. There are already Muslim areas of French and Swedish cities that are almost ungovernable. There is obviously a precedent for just this situation-- Serbia, Bosnia, Croatia, Albania,... A recipe for continuous war and cultural devastation (c.f. the history of the Balkans). Thanks, multiculturalists.

4) European Fascism A dreadful possibility, but I think unlikely, at least on any large scale. Fascism in its developed form is a composite of socialism ('National Socialism') and paganism (worship of state, race, soil). The Europeans certainly have adopted the socialist part, but they will likely go bankrupt before they can channel their panic into a new Wehrmacht. Greece ain't invading anybody, at least not after 3:00 p.m. on workdays or on weekends.

The pagan part of Fascism may be beyond the Europeans as well. European spiritual lassitude is so advanced that they would have to rise, not fall, into paganism. Too much effort. They won't even raise children, let alone attend torchlit rallies in stadiums.

That said, a rise of real Fascism in Europe would be a catastrophe for all involved. The Europeans may lack motivation now, but history shows that an aroused Europe can commit homicide on an astonishing scale. European totalitarianism (Nazis, Communists) makes Islam look like the nice guys.

5) Caliphate A possibility, limited by only one thing. Islam is a feeble military force, and has been since Vienna in 1683. Muslims kill Americans working in tall office buildings and Jewish children in busses and pizza parlors. The only factor that links all modern effective Muslim violence is that their victims are unarmed.

Military historian Victor Davis Hanson has observed that Islam has lost every direct military conflict with the West since the 17th century. The reasons are plenty-- technical incompetence, arrogance, suppression of free exchange of ideas that are necessary to the correction of military errors, etc. Western military forces slaughter Muslim forces, always, whenever they meet in sustained battle (c.f. Ottomans in WWI, wars against Israel, Gulf War 1 and 2, Afghanistan, ...) In war, Muslims are Western cannon fodder. I doubt that the Muslims can actually conquer Europe to the extent that a pan-European caliphate could be consolidated.

I believe that the Balkans scenario is the most likely, in fact, the only likely scenario. It would be a tragedy-- much bloodshed, erosion of a magnificent Christian culture, and the consignment of millions of people to Islamic tyranny.

There is one reason, and only one reason, for this catastrophe: the loss of Christian culture and civilizational confidence in Europe.

Thanks, atheists.
Posted by mregnor at 6:00 PM