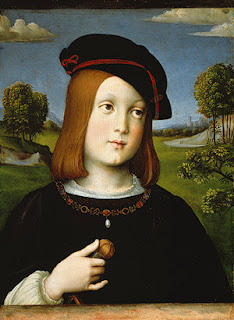 From the Heilbrunn Timeline of Art History

Overall 18 7/8 x 14 in. (47.9 x 35.6 cm), painted surface 17 3/4 x 13 1/2 in. (45.1 x 34.3 cm)Bequest of Benjamin Altman, 1913 (14.40.638)
In July 1510, the ten-year-old Federigo Gonzaga was sent from Mantua to Rome as a hostage. On his way to Rome, he stopped in Bologna, where Francia astounded everyone by painting and delivering this jewel-like portrait in twelve days. The picture was subsequently taken to Rome for the admiration of the papal court and was only reluctantly returned to Isabella d'Este, Federigo's mother.
The format is one commonly used by the artist—the bust-length figure is set behind a parapet, with one hand visible and a sweeping landscape behind. Given the time constraints under which he was working, Francia wisely kept the depiction rather simple: there are bold contrasts between the boy's dark costume, the green of the landscape and foliage, and the blue of the far distance. The artist, originally trained as a goldsmith, has captured the gleam of the boy's gold necklace and the hilt of his sword. Most remarkably, however, he has captured the tender expressiveness of the boy's face.
Posted by mregnor at 9:00 PM