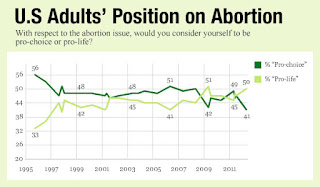 National Review On-Line has a nice symposium on the recent surge in public support for the pro-life position. The pro-abortion view has dropped seven points in a year.

The participants in the symposium discuss a variety of explanations-- the vibrancy and manifest rightness of the pro-life movement, the increasing availability of pre-natal ultrasounds, the stridency and plain ugliness of the pro-abortion movement, among others.

These all matter, for sure. But I do note that much of the pro-life ascendency is among the young. There is growing and passionate support for defense of innocent life among young people.

There is a reason for that, a reason that transcends ultrasound technology and marketing of ideologies.

Young people are beginning to understand abortion in a way that is quite different from the way their parents understood abortion. Young people are increasingly pro-life because they are realizing that the abortion battle is their battle.

Abortion is personal for the young, in a way it has not been for us older folks. Young people-- the 75% of children who survived Roe-- understand which side in the abortion battle fought to protect their lives, and which side was willing to forfeit their lives for profit and for convenience.
Posted by mregnor at 6:00 AM