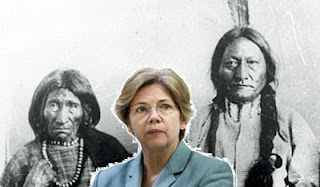 
... what may undermine racial quotas and preferences most effectively is ridicule. For isn't the idea that the blond, blue-eyed Warren suffered some terrible disadvantage and is in need of special preference because she is 1-32nd Cherokee just laugh-out-loud funny?


It seems not to have troubled Warren at all that by flopping her paste-white derriere in her endowed Harvard chair she necessarily displaced a genuine "minority" applicant who maybe had a little more than 3% Cherokee genome, even the rare applicant who perhaps might have faced some actual adversity due to their particular heritage.

Elizabeth Warren is an uncommonly smarmy practitioner of the affirmative action con-game. She used it for personal gain, unconcerned about who she walked over to get her sinecure, and she now dissembles, calls critics "anti-woman", and whines about getting caught-out as a hypocrite.

Did I tell you that she was a liberal Democrat? You probably already guessed that.