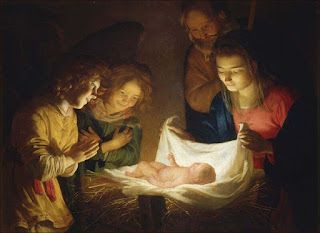 A fascinating book review and reflections by Phillip Cary at First Things. He asks:

"Could God be a material being?"

In classical Greek thought, pure matter was infinite, which was not a good thing. To be infinite was to be limitless and so without form. And since form is the basis of all understanding—making it possible for us to perceive the physical or conceptual structure of a thing and thus grasp its essence—it follows that pure matter must be not only formless but an incomprehensible chaos.

Orthodox Christianity could not accept this notion of limitless, chaotic matter. To begin with, the early Church put a definite limit to matter in one direction by rejecting Aristotle’s notion of the eternity of matter. Matter is among the things God brought into being when he created the world out of nothing. Then, hesitantly at first but in the end decisively, the orthodox theological tradition transferred the attribute of limitless infinity to God, accepting the Neoplatonist contention that the highest divinity was above the ontological level of form and beyond any level of being that a finite mind can understand. God, not matter, was both infinite and incomprehensible

The road not taken... is to retain the limitless eternity of matter but relocate it in God, and then to break the connection between infinity and incomprehensibility. And so an infinite divine materiality—matter that God never created because it has always existed—can be the ground of our likeness to God and our understanding of him. God’s material substance is something he has in common with us and therefore something we can comprehend. And Christ has yet more in common with us than God the Father does, because even before he came into the womb of Mary he had a particular material body.

[This means] jettison[ing] every form of negative theology, or apophaticism, and even the Thomistic strategy of analogical discourse about God, in favor of Duns Scotus’ metaphysics of univocal discourse, where being means the same whether we’re talking about God’s being or ours. For both God and his creation, to be is to be material. And a material God, even if infinite, has enough in common with us that he is not beyond our understanding.


It this "road not taken"-- the location of the limitless eternity of matter in God-- the truth about God?

As Plato pointed out long ago, a material being is not simple but composed of parts that are other than the whole. Hence a material God is dependent for his being on what is not identical with himself. The material he is composed of is not only necessary for his constitution but in an important sense prior to himself—more primordial than God. A materialist metaphysics leaves God fundamentally dependent on what is not God.


The solution, Cary suggests, is in Christian orthodoxy:

Nicene Christianity has developed a robust way of affirming the suffering of a God who is not by nature material or time-bound. For Christ himself, as Gregory of Nazianzen put it in a formulation frequently echoed by Augustine, “remained what he was and took up what he was not.” That is to say, he remained eternal God, immaterial and unchanging, beyond suffering and death, even when he took flesh of the virgin and thereby made our materiality, suffering, and death his own, though they are not inherent in his divine nature...

Thus God the Son freely makes all that is ours his own, while remaining eternally what he is: not only unchanging, immortal, and impassible, but immaterial. He does not need heavenly flesh to be Immanuel, the God who is with us and one of us.


Cary probes the mystery and beauty of the greatest of miracles, which is the Incarnation-- that the Word that was God became flesh and dwelt among us. In taking on our flesh and our suffering while remaining Eternal and Infinite, God takes us to Himself, by His free choice of love for us.
Posted by mregnor at 6:00 AM