The parasites feast on Detroit 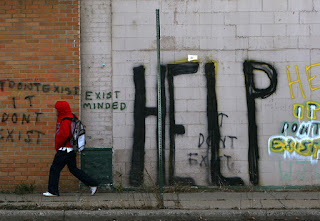 Walter Russell Mead has a great essay on the political corruption that has destroyed Detroit.

There is something profoundly wrong with an American political culture that accepts chronic misgovernment in major cities as OK. It is not OK; the people who do these things may call themselves liberal Democrats and wear the mantle of defenders of the poor, but over and over their actions place them among the most cold blooded enemies and oppressors of the weak.

American cities have been festering pits of graft and bad governance since at least the early 19th century, but there is a difference between the “honest graft” of Tammany Hall and the nihilistic destruction practiced by some of today’s urban machines. Today’s situation, in which some city machines are so dysfunctional that the parasite is literally killing the host (and not just in Detroit), is new and, again, the most vulnerable in our society suffer the worst consequences. Minority children are the greatest ultimate victims of this loathsome corruption: they attend horrible schools and grow up in decaying, unsafe urban landscapes where there is no growth, no jobs and no opportunity for the young.