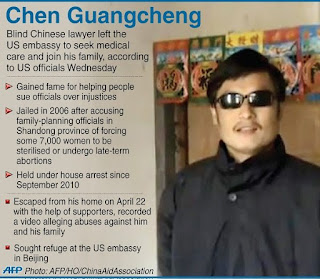 The Chinese dissident who has been punished by the Chinese government for his opposition to China's One Child Policy-- a population control scheme which includes forced sterilizations and abortions-- has gotten less than enthusiastic support from the Obama Administration. Chen Guangcheng has been released/turned over to Chinese authorities for "hospitalization".

Mr. Chen is a courageous man who has worked hard to oppose population control, which is an ongoing crime against humanity. The United Nations and the International Criminal Court have defined as genocide:

"... the following acts committed with intent to destroy, in whole or in part, a national, ethnical, racial or religious group, as such... Imposing measures intended to prevent births within the group"


Mr. Chen's work in support of this basic human right-- the right to be free from government control of family size-- has gotten little sympathy from the Obama administration. Perhaps he could stir up passion from the left by abandoning his struggle against population control totalitarianism and instead demand that he receive free contraception.

Free condoms, rather than human dignity, seems to be what the left is willing to fight for.
Posted by mregnor at 7:57 PM