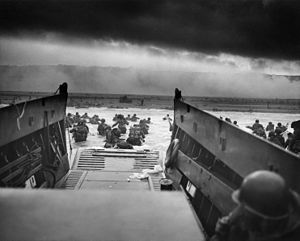 My father-in-law, who was Jewish, landed at Normandy a couple of days later, and fought across France until a mine shredded his right leg. He suffered the rest of his life for his injury-- he walked only with a brace and with pain, and had a continuous bone infection until the day he died forty years later. Back in civilian life, he became an architect and raised four girls and never missed a day of work. My mother-in-law was the army nurse who saved his life during his year and a half of hospitalization to rebuild his leg and his life.

My dad fought in the Pacific, a gunner on a B29, and my mom was in the Women's Army Air Corps.

All heroes, along with millions of the greatest generation who quite literally saved mankind.

Thanks guys. May God bless you all.
Posted by mregnor at 5:51 PM