MSNBC: George Wallace was a Republican. 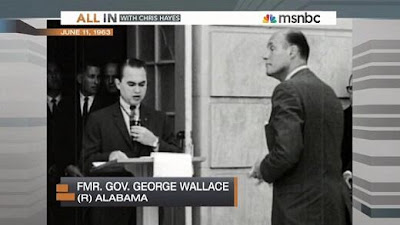 One is tempted to attribute this idiocy to an intentional lie on the part of the loon left at BSNBC, but I suspect abject stupidity is at work here. I have liberal friends who have been shocked-- shocked-- to hear that the KKK was the terrorist arm of the Democratic Party (a position currently occupied by the IRS). They didn't have a clue that the race-baiting bigots who brought us segregation and lynchings hated Republicans (and Catholics) almost as much as they hated blacks.

Wallace, like virtually all segregationists, was a lifelong Democrat (for you liberal readers who are still in a state of denial), and he embodied the opportunistic race-baiting venom that has always been the hallmark of the Democrat Party.

Segregation was the ultimate progressive Democrat project-- the perfect amalgam of race-mongering and government control of the most intimate aspects of people's lives. Wallace was a big-government Democrat, who used racial fear and hate to advance himself.

Wallace was, you might say, the political mentor of Al Sharpton and Jesse Jackson, Democrat race-baiters who were also Democrat presidential candidates.