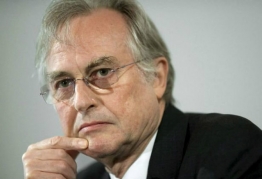 [Dissociated Press] Pundits and intellectuals today applauded the announcement by Prospect Magazine that outspoken atheist and former Oxford professor Richard Dawkins has been voted "The World's Top Thinker" (not a parody).

We here at Dissociated Press had the pleasure of interviewing Sam Shelton, publisher and CEO of Prospect Magazine, about this remarkable public intellectual.

DP: Mr. Shelton, it must be a real thrill to have this opportunity to highlight the accomplishments of Professor Dawkins, who has contributed so much over the past couple of decades to public debate on such issues as evolution, morality, and God's existence.

Shelton: Indeed. We are honored to confer the award.


DP: Sir, how was the poll conducted?

Seldon: Oh, yeth. By a huge margin-- by over 900 voteth. No other public figure wath clothe. The biggetht thtinker? It wath Richard Dawkinth by a landthlide.