"like a dead frog whose legs are still kicking" 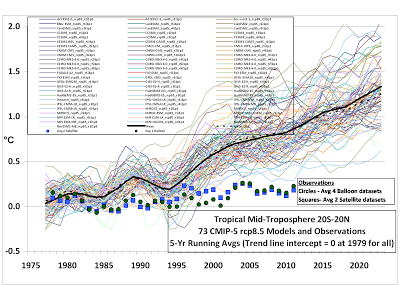 The curtain is coming down rapidly on global warming alarmism, as evidence of the AGW theory’s falsity accumulates on nearly a daily basis. Of course, the global warming machine grinds on, like a dead frog whose legs are still kicking...

This chart, via Watts Up With That, sums up the hopelessness of the warmists’ position as well as anything. It charts the various projections generated by the models relied on by the U.N., etc, against actual global temperature data as observed via satellites and balloons. The black line represents the mean of the model projections, the green circles represent the average of four balloon data sets, and the blue squares are the average of two satellite data sets. The chart is set so that the mean model projection intersects with empirical observations in 1979:

Any model must either pass or fail the test of empirical observation. The warmists’ models, on which the entire edifice of global warming alarmism stands, fail the test. The warming they predicted just isn’t happening. The alarmists like to say that the science is settled. We are rapidly approaching the point where they are correct: the science is, indeed, settled, only not the way they intended. If you put aside the trivial proposition that it is warmer now than it was during the Little Ice Age, there is no empirical basis for climate alarmism.

In my opinion, the day of reckoning has arrived. The modellers and the IPCC have willingly ignored the evidence for low climate sensitivity for many years, despite the fact that some of us have shown that simply confusing cause and effect when examining cloud and temperature variations can totally mislead you on cloud feedbacks (e.g. Spencer & Braswell, 2010). The discrepancy between models and observations is not a new issue…just one that is becoming more glaring over time.

Scientific failure will not, of course, put the warmists out of business; not quickly, anyway. There is too much money in it. But the taxpayers’ patience with subsidizing pseudo-science is rapidly running out.


The scam's up, but the warmist frauds will keep kicking until the next green apocalypse gravy train comes along.

In the meantime, the academic discipline most apropos to climate alarmism will continue to be not climate science but forensic science.
Posted by mregnor at 12:00 PM