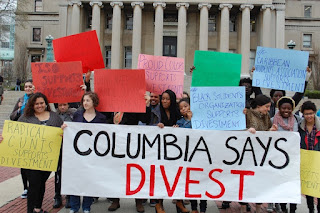 It seems the anti-Semites in the BDS movement are feeling some of the heat they are trying to inflict on Jews:


[BDS anti-Semites] have turned themselves into societal laughingstocks, bizarre caricatures of disgruntled parasites on society who have lost the respect of just about everyone outside of their relatively small academic circles. You act like clowns, but express shock when people treat you like clowns... On what ground do the academic boycotters of Israel claim their own academic freedom if they are so quick to deny it to others? Because they think they are right? What if the people who want to boycott the boycotters believe just as firmly in their own correctness?

BDS anti-Semites need to be called out, labeled, kicked out of academia and banned from society of decent people, which is precisely what they're attempting to do to Jews.
Posted by mregnor at 9:42 PM