We've had enough of Planned Parenthood 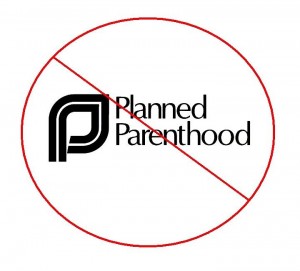 More than 94% of the women that entire a Planned Parenthood clinic pregnant depart the clinic without their child. Adoption accounted for less than .08% of those numbers last year—I wasn’t a math major but that seems a wide disparity to me.

We the tax-payers have given them more than a half billion dollars for the last several years. On average it comes to about $1,800,000.00 per day that they take from the tax-payer.

So not only are these spawns of Satan performing illegal breech abortions, partial birth abortions, and born alive abortions while then doing the most stomach churning things to the bodies following—but you and I are paying for it. We give them roughly $1,600.00 per child that they do it to.

They will lie and say that they don’t use the tax-payer money, but it all ends up in their general fund. They will lie and say that they stay within the law, but the videos already demonstrate they don’t—with thousands of hours to go. They will lie in their slogan and say they “care, no matter what.” But does anyone believe that the baby that was illegally put into a breech position (as described on video 1) and then is partially delivered (illegal), and then has its crunchy limbs and skull crushed—while leaving the torso in tact, ever sees one ounce of “care?”

It is not enough to merely defund Planned Parenthood. It must become a significant focus for those of us with the passion and the determination to do so, to prosecute the evil people that are committing these atrocities against those we hold most innocent, and should be most protected.

Babies are not clumps of cells, they are not random samples of tissue, they are human beings with the same rights guaranteed them by God as Cecile Richards and Rebecca Watson.


Read the whole thing. Time to finish this odious organization.  Democrats are on the PP payroll, and the connections between PP and the Party of Slavery, Segregation and Infanticide need to be made public and used as a cudgel to discredit Democrat collaborators with our national holocaust.

Republican leadership has repeatedly failed to bring the hammer down on these murderers, and we need to hold lilly-livered Republicans' feet the fire.

Planned Parenthood needs to end, and its administrators and practitioners need to go to prison.
Posted by mregnor at 3:45 PM