Can the United States survive without Planned Parenthood? 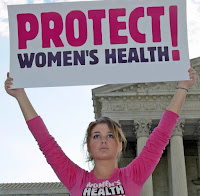 It would be a close-run thing, it seems:


A 2012 study by George Washington University professors examined five counties in Texas and found that Planned Parenthood was the “dominant” provider in those areas. The study found that other clinics would need to increase their capacity by “two- to five-fold” in order to handle Planned Parenthood’s patients, but were already at or close to capacity.

Yikes. PP is so essential to women's health that ladies would be dying left and right if we shunt down America's Abortion Mill.

If global warming doesn't get ya, closing Planned Parenthood will. It's a consensus.

Actually, it may not be so bad:


it may be that federal support and subsidies for Planned Parenthood has had the effect of squeezing smaller providers out the markets where they dominate. Furthermore, the passage of ObamaCare was supposed to offer even broader choices by forcing everyone either into a comprehensive insurance plan or onto Medicaid. Women, especially poorer women, shouldn’t have only an abortion mill for their health care, and the government shouldn’t subsidize them and crowd out other potential providers.

Yea. Planned Parenthood is like Walmart-- a behemoth that moves into town and crowds out other providers. The analogy would be exact if Walmart not only sold retail but also killed several hundred thousand children each year and sold their organs (at the lowest price!).

Actually, there doesn't seem to be much truth in the scare:


According to the Government Accountability Office, the roughly 1,200 community health centers in the U.S. serve over 21 million people per year. Planned Parenthood, by contrast, serves 2.7 million people.
“These are comprehensive health care centers, something that Planned Parenthood is not,” said Mallory Quigley, a spokeswoman for Susan B. Anthony List.

Closing Planned Parenthood may actually improve women's health care, at least for the 150,000 baby girls who won't have their skulls crushed each year.

And Cecile Richards' health care might improve as well--the federal prisons have quite good health services.
Posted by mregnor at 7:27 AM