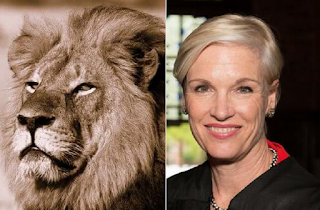 
Cecil the lion gave the Left a great gift: The death of the African apex predator at the hands of Dr. Walter Palmer, an American dentist, has driven the North American apex predator — Cecile Richards of Planned Parenthood — off the front page for a moment. Not all harvesting is equal in the eyes of the American chattering class.

The Left freaks out about killing a lion or a baby seal or a delta smelt. But killing 60 million babies and selling their organs--it's a right, don't you know, guaranteed in the Constitution, somewhere.

Fight the Left, everywhere and without ceasing. Its depravity knows no limit.
Posted by mregnor at 10:49 AM