After Newtown, where were the Humanists? 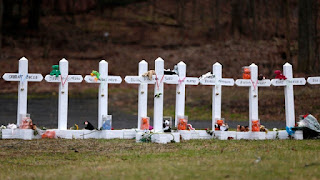 From the New York Times:

In a Crisis, Humanists Seem Absent

The funerals and burials over the past two weeks have taken place in Catholic, Congregational, Mormon and United Methodist houses of worship, among others. They have been held in Protestant megachurches and in a Jewish cemetery. A black Christian youth group traveled from Alabama to perform “Amazing Grace” at several of the services.

This illustration of religious belief in action, of faith expressed in extremis, an example at once so heart-rending and so affirming, has left behind one prickly question: Where were the humanists? At a time when the percentage of Americans without religious affiliation is growing rapidly, why did the “nones,” as they are colloquially known, seem so absent?

To raise these queries is not to play gotcha, or to be judgmental in a dire time. In fact, some leaders within the humanist movement — an umbrella term for those who call themselves atheists, agnostics, secularists and freethinkers, among other terms — are ruefully and self-critically saying the same thing themselves.


It's interesting to note that whenever public tragedies happen, Humanism takes a rain check. Humanists will moan that they have not been sufficiently organized, or funded, or oriented to grief counseling, etc.

Yet perhaps Humanists have reasons to be silent. What would Humanists say about kids and teachers in Newtown praying in their last moments? Were the last acts of the innocents in Sandy Hook Elementary School unconstitutional?

Humanists would never point out this necessary corollary of their creed, of course. Humanism publicly affirms gauzy creeds: human rights for all, non-violence, incessant benevolence, all of it.

Yet Humanists hold to a Darwinist understanding of human origins. If you believe that the deaths of other people's children give your offspring a leg up in life, you might find that grief counseling does not come naturally.

Humanist beliefs make moral responsibility difficult to ground. If there is no God, then there is no objective morality-- no real good or evil-- only moral opinions of individual men. If there is no afterlife, there is no ultimate accountability for good or evil.  All men are destined for annihilation. Good and evil, like man, are dust.

Humanist morality devolves to the opinions of individual men, and without God there is naught but opinion to separate the cacophony of human purposes. The only Humanist purpose for a man's life is the purpose he gives it.

Humanism wasn't absent in Newtown. It wore a utility vest, on a nihilistic binge of self-fulfillment.
Posted by mregnor at 6:00 AM