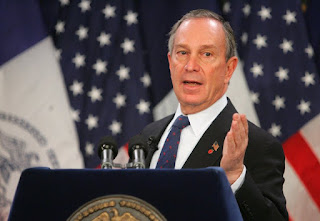 "If little six year olds have to face gunmen in gun-free zones, I should too." said the dapper Mayor, a muscle twitching in his jaw. "Why should billionaire liberal politicians have heavily armed security in a gun-free zone, and little kids in school are left to fend for themselves against psychos."


Bloomberg unbuttoned his shirt, to reveal-- a Sponge Bob T-shirt, and no... bullet-proof vest!


Other mega-rich liberal gun control activists, including 26 Hollywood stars and starlets, have announced that they have fired their personal armed security details, in solidarity with the forty million K-12 students in gun-free school zones.

Pro gun-control members of Congress have written to the Washington police demanding that all security officers in the Capitol and House and Senate Office Buildings be disarmed immediately.

"What kind of hypocrites would we be", said the politicians, "if we enjoyed the security of armed professionals while denying it to millions of defenseless schoolchildren".