The latest from "Trend Central" 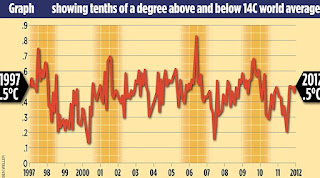 This is fun. Commentor Hoo is diligently calculating to show that the graph of world temperature over the past 16 years (above) shows a warming "trend".


And with that, I will repost the numbers for the temperature trend obtained from HadCRUT4 from various starting dates until today:

We are talking about the time dependence of the average global temperature anomaly ΔT as a function of time t. Specifically, ΔT(t) = ΔT(t0) + β(t−t0). Here t0 is a starting point in time and β is the linear slope.

... the HadCRUT4 data set (among others) yields a positive β even if you cherry-pick the starting point? The values of β for various starting points are quoted in my previous comment.


Hoo's evidence for global warming in that graph:


Global warming science in real time, as it happens.