I was born. See you in court. 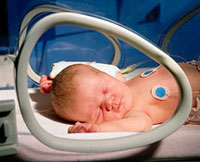 You can't parody the culture of death. This is for real:

This is so awful and tells us the state of discrimination and loathing faced by people with disabilities. Apparently so-called “wrongful life” lawsuits are epidemic in Israel–wherein parents sue in the name of their child because a disability went undetected in utero, and hence, no abortion was performed. From the Bionews story:

Increasing numbers of Israeli children with birth defects are suing medical professionals for failing to detect abnormalities and allowing them to be born, says the New Scientist. The magazine reports that such is the Israeli Government’s concern over the rise in ‘wrongful life’ lawsuits it has launched an investigation into the validity of the claims. New Scientist says the Israeli medical profession has estimated there to have been 600 ‘wrongful life’ lawsuits since the first case in 1987. ‘There is an entire system fuelled by money and the quest for the perfect baby ‘, said human rights lawyer Dr Carmel Shalev of the University of Haifa in Israel. ‘Everyone buys in to it – parents, doctors and labs. Parents want healthy babies, doctors encourage them to get tested, and some genetic tests are being marketed too early. Genetic testing has enormous benefits but it is overused and misused’.

Medical malpractice is one thing, wrongful life another. Won’t this lead to a “when in doubt, abort” mentality? But this is what really gets me:

The psychological implications of the lawsuits on the children concerned have been highlighted by several medical ethicists. ‘I find it very difficult to understand how parents can go on the witness stand and tell their children ‘it would have better for you not to have been born. What are the psychological effects on the children?’ said medical ethicist Professor Rabbi Avraham Steinberg of University Hadassah Medical School, Jerusalem. The precise legal basis for the children’s claim and the court’s approach to calculating damages is not, however, clear.

Having children comes with no guarantee, nor should it. Wrongful life lawsuits should be banned legally as a matter of public policy and disdained ethically as a profound insult to human exceptionalism.

Catholic ethicists have a name for this-- they call it "structures of sin". Structures of sin are institutional and cultural manifestations of sin--  the secret police in totalitarian countries, as well as the abortion industry and the pornography industry, would be obvious examples.

The legal theory of "wrongful life" is a structure of sin. It is a manifestation of the culture of death in law. In "wrongful life" lawsuits, the legal theory is that it is actionable under tort law to allow a handicapped person to be born. It is a perversion of nearly every relevant principle of law and morality. Life is not a "harm", having a handicap does not diminish the value of a life nor does it make it in any way preferable to not have lived, etc.

If you want to understand the absurdity and cultural rot bequeathed by the culture of death, there's no better place to look than "wrongful life" suits. I agree with Smith. Wrongful life suits should be banned and the legal professionals who brought them should be shunned.
Posted by mregnor at 6:00 AM