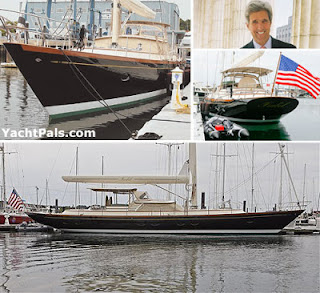 Whatever else it might portend, [John] Kerry’s appointment as Secretary of State is certainly good news environmentally. The New Republic put it well:

Kerry, long an advocate for the U.S. to lead on climate change prevention, has compared the threat posed by poor international effort to confront climate change to that of war. In an August speech on the Senate floor, he said, “We all know what’s happening with respect to Iran, and nuclear weapons and the possibility even of a war. … This issue actually is of as significant a level of importance, because it affects life itself on the planet. Because it affects ecosystems on which the oceans and the land depend.” As National Journal’s Coral Davenport points out, “He was the only U.S. senator to attend key UN climate-change negotiations in Bali, Indonesia, in 2007, and Poznan, Poland, in 2008.”

Kerry’s commitment to the environment runs deep. Along with Theresa Kerry, he authored a book a few years ago called “This Moment on Earth,” which builds on stories about local activists to discuss broader issues of policy. As the book shows, Kerry’s concerns are by no means limited to climate change:

The planet is in crisis. [W]e live in a world so infused with toxins that they have made their way into the soil, the air and water, and our bodies from conception to the end of life. This stark reality was bluntly confirmed in March 2005 with the release of the UN’s Global Millennium Ecosystem Assessment. . . It was the most comprehensive look at the health of the world’s oceans, land, forests, species, and atmosphere to date, and its conclusion was bleak — Many of the world’s ecosystems are headed for collapse unless radical measures are implemented to revive them.

According to the report, over the past 50 years, human actions have depleted the Earth’s natural resources on an unprecedented scale to satisfy growing demands for food, fresh water, timber, fiber, and fuel. The report’s authors warned about the calamitous state of many of the world’s fish stocks, the intense vulnerability of the 2 billion people living in dry regions to the loss of ecosystem services including water supply, and the growing threat to ecosystems from climate change and nutrient pollution. [p. 7]

In Kerry’s State Department, environmental concerns are likely to have high priority, including but not limited to climate change. Good news indeed.


Eco-warrior Kerry is well-equipped to wage war on climate change. The billionaire (by marriage) Senator has a navy (his 7 million dollar 76 foot yacht), an air force (his private jet named "The Flying Squirrel" after his favorite ski trail), armored calvary (he rides in SUV's), and well defended land bases (he has five private luxury homes.)

Your selfish "demands for food, fresh water, timber, fiber, and fuel" are endangering the planet, and you must cede power to Senator Kerry and his colleagues, who will tax the gas you exhale.

Just as it should be. You aren't a denier, are you?
Posted by mregnor at 6:00 AM