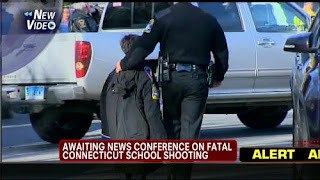 The recent horrendous mass killing in the Connecticut elementary school (it hurts to write that) is more evidence for what is perhaps the salient lesson of 20th century governance:

The question answers itself.

What the gun control mentality does do is create gun-free zones. Victims who are guaranteed by law to be unprotected. Which to shooters is like flame to moths.

More stringent gun control is worse than useless. It perpetuates conditions that make mass shootings easier. What idiots would want to do that? (you know who you are).

So what can we do?

We need guns-- in the hands of responsible people. We need security. Armed security.

Let's look at the places that aren't gun-free zones. The White House isn't a "gun free zone". You can't carry a gun there, of course, but there are lots of guns at the White House. At the doors, on the grounds, in the building, on the roof. My son and I visited the White House last spring. Armed snipers on the roof watched us. There are lots of guns at the Capitol, and at state capitol buildings and legislatures across the country. There are guns around movie stars, famous television personalities, in the entrance foyers of place of business and the homes of the rich and powerful.

If you start shooting at the White House or the Capitol or at the home of a heavily guarded cultural potentate, you are dead. In seconds.

The people who tell you that guns won't protect you are themselves surrounded by highly trained people who carry guns to protect them.

Our schools need the same security our congressmen and senators and presidents and elites get.

That will stop school shootings. Immediately. The simple knowledge that anyone drawing a weapon in a school has a life expectancy counted in seconds will end it. It is the defenselessness of the victims and the control that shooters have-- even and especially the control over their own deaths-- that drives them. Mass shooters love gun-free zones, because it gives them ultimate power, over the lives of innocents and over their own lives.

We need to take that power away. Every school needs armed security guards, well trained, ready to protect the kids. It can be simple. We need a "60 second" rule: no active gunman in a school should live more than 60 seconds. We need trained armed guards in our schools and colleges and malls and theatres-- everywhere where the banning of guns has permitted mass murderers to kill without hinderance.

But how can we afford this, you liberals ask? Your sudden interest in government spending is refreshing. Consider this. There are 100,000  K-12 schools in the U.S. School systems already have security personell, but consider the cost of hiring, training, equipping two armed security guards for each school, at say $100,000 each per year. That's $20 billion dollars per year to end school shootings. It would also hire 200,000 workers, and the security folks could contribute to school safety in other ways (fire safety, protect kids from harassment, theft, molestation, etc). Heck, we pissed away a trillion dollars in "stimulus" to Democrat contributors and pork and "green" jobs boondoggles. That would've paid for 50 years of security at every school in the nation. The half billion dollars we pissed away on Solyndra would have paid for security guards at more than a thousand schools for a year. How much would guards at Sandy Hook Elementary have been worth? More than paying off Democrat bundlers who own stock in solar panel companies?

We need to jettison idiot liberal gun-control mentality that doen't work and merely serves to disarm victims and disarm the law-abiding citizens and professionals who could protect them.

Can you think of anything more stupid than the liberal policy of creating gun-free zones-- defense-free zones-- in which shooters know they can kill with impunity?