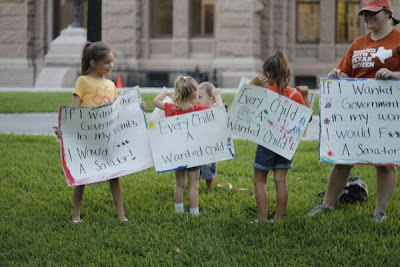 "Every Child a Wanted Child" is a slogan coined by eugenicist Fredrick Osborne in the 1950's in his successful drive to rebrand eugenics, after the p.r. hit it took when the Nazis carried eugenics to its logical conclusion. It is now Planned Parenthood's mantra.

"If I wanted the government in my womb, I would *** a Senator" is a great sign for a little pre-teen girl to be carrying, don't you agree?

Pro-abortion politics brings out the worst in humanity.
Posted by mregnor at 6:00 AM