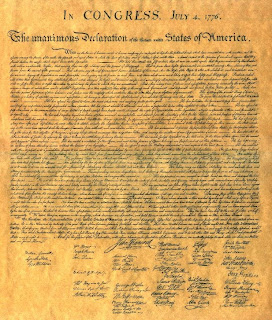 
Words to transform the world
America was the first nation self-consciously founded as the embodiment of an idea — the “self-evident” truth that “all men are created equal” and endowed by God with an “unalienable” right to life and liberty. In a world that had always connected nationhood and citizenship to blood, soil, and ethnicity, the democratic republic born in 1776 presented a prospect that was revolutionary in the profoundest sense imaginable — and Americans from the outset were certain that their model of self-government was destined to radiate outward, shaping the course of human events.

To Tocqueville, this was more than mere patriotic braggadocio. He could see that the world was ultimately going to be transformed by the enlightened doctrines of democratic liberty and individualism. But in America — remarkably — this great transformation had already “been effected with ease and simplicity.”

For the first time in my life I am worried about the survival of our constitutional democratic government. We are governed by a crime syndicate that infests not only the White House and many seats in Congress, but reaches into countless crevices in our alphabet federal agencies. This syndicate collects massive data on each of us each day, and lies to us about it, openly and without consequence. It has shown no reluctance whatsoever to use unlawful and unconstitutional means to hold power and to corrupt democracy, when it suits their ends. It is maintained in power by what is essentially a state-run mainstream media and an immense labyrinth of crony capitalism for the collaborating rich and Obamaphones for the collaborating poor.

We are increasingly ruled by the elites and by people who are useful to the elites. The corrupt 2012 presidential election, in which at least one powerful arm of the federal government systematically attacked and supressed a large portion of the electorate, is a stark example.

Angelo Codevilla still has the best analysis of what is happening to us-- the struggle between the ruling class and the country class.

But America remains a very beautiful thing. These are still the best words (outside of the Bible) ever written:


“We hold these truths to be self-evident, that all men are created equal, that they are endowed by their creator with certain unalienable rights, that among these are life, liberty and the pursuit of happiness.”

Our unalienable rights are from God, and are prior to government. Government cannot legitimately take away what it did not bestow.

Just as relevant to our crisis today are Jefferson's words that follow:


That to secure these rights, Governments are instituted among Men, deriving their just powers from the consent of the governed.

That whenever any Form of Government becomes destructive of these ends, it is the Right of the People to alter or to abolish it, and to institute new Government...

We're getting closer to that.

Today let's celebrate our Declaration. But we must celebrate it for what it is. We must not forget, notwithstanding the eloquent prose, that it is a Declaration of war.
Posted by mregnor at 6:00 AM