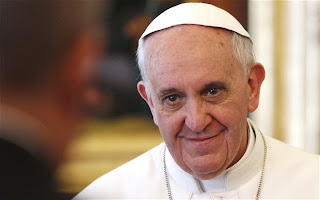 
"If a person is gay and seeks God and has good will, who am I to judge him?

Precisely. A person who is a sinner (like each of us) and who seeks God and who has good will should not be judged by any of us. The sin itself can be judged, but with discretion and compassion, and with the recognition that all sins-- ours and others'-- are subject to judgement, by God and by men.

People, on the other hand, are created in God's image and should not be judged by men. For gay people who seek God and have good will, the Holy Father says we should temper and even withhold our criticism, as we would hope others would do for us, while the Lord transforms souls.

That does not mean we condone sin. It means that we refrain from creating scandal about others, while they are working out their liberation from sin through Christ.

The Holy Father adds a crucial proviso: the problem is not our brothers and sisters who are gay. The problem is lobbying by radicals who are gay, why work to twist our society and deny natural law and drive Christians from the public square. These ideas and acts are to be opposed with vigor.

Love of sinners, and hatred of sin, is basic Catholic doctrine, and what the Pope is saying is nothing new.

But he says it beautifully, with compassion and gentle candor, which seems to be his way.
Posted by mregnor at 6:00 AM