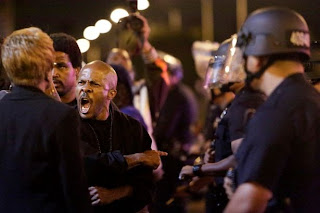 I've written before about Rene Girard, a Catholic literary scholar, cultural anthropologist and philosopher who is in my view the seminal cultural thinker of the past couple of centuries.

Girard's theory of man-- Mimetic Theory-- has much to tell us about the tempest over the killing of Trayvon Martin and about the agitators and politicians who are manipulating it.

If you are not familiar with Mimetic Theory, I give a synopsis at the linked post.

In the black community, as in much of America in these hard times, there is much turmoil. There is resentment, bitterness, envy, anger. Such ferment gives rise to mimetic contagion-- an irrational war of all against all, usually violent, always destructive.

This periodic turmoil is a normal dynamic in human culture. It characterizes human culture, Girard points out. The natural and common resolution of this fratricide is through the mechanism of scapegoating-- picking out a person or group who is held to blame, or held as a symbol, for all that ails the community. The resolution of the conflict is the uniting of the people against the scapegoat, who is sacrificed or banished by the mob.

Mimetic contagion is spreading rapidly in the black and leftist community. Leftism has long been a hotbed of Girardian conflict. The scapegoat obviously is George Zimmerman. Zimmerman, who is innocent of any crime, is bizarrely held responsible in a not so subtly symbolic way for all of the violence that afflicts black America, which is a lot of violence.

Girard points out that it is Christianity that most effectively defeats mimetic contagion and scapegoating. Mercy, forgiveness, and refusal to take part in mob hate and violence is the antidote to mimetic contagion.

I have noted in an earlier post that Zimmerman's acquittal is an enormous victory for those who are busily escalating this violence. The Obama administration is plainly using Martin's death to stoke hate and fear, for obvious electoral advantage.

Although it's doubtful that Chicago political gangsters like Obama and Holder know anything about Girard's work, they clearly have a powerful intuitive grasp of mimetic conflict, scapegoating, and the political uses for hate and fear.

Obama and Holder understand that it is premature to allow sacrifice of the scapegoat (Zimmerman). It is useful to identify the scapegoat, which they have done at trial, but actually convicting and jailing Zimmerman (sacrificing the scapegoat) would quell violence, which is antithetical to their goal.

The Zimmerman acquittal-- the perpetuation of the hate and violence and scapegoating-- was the goal of the prosecution. Zimmerman's conviction-- the sacrifice of the scapegoat-- would have calmed the violence and hate.

For Democrats, the scapegoating must be redirected in order to be of maximal political use. It is Republicans, not Zimmerman, who must be the scapegoats sacrificed, at the polls.

Democrats will keep the contagious hate and violence going, and use it for political ends. It is their most effective strategy for 2014, and it's working nicely.

It's Girard's world, and the leftist gangsters in Washington and elsewhere who are orchestrating the Trayvon Martin carnival of hate understand it frighteningly well.