The face of the Left 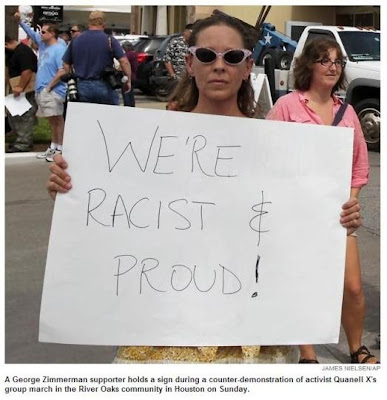 I could tell she was a lefty from the way she wrote the ampersand.


Here's a woman at a pro-Zimmerman rally, giving the pro-Zimms bad PR...

Was anyone fooled by that? I hope not, but Renee Vaughan — an Austin activist —is getting reamed for her evil prank. Instapundit says:


Her name is Renee Vaughan. Her employer, the Texas Campaign For The Environment, has also apologized. Nonetheless, I hope the picture of her standing with a sign reading "We’re Racist And Proud" winds up being tagged to both....It's a harsh consequence to become — for all time, on the web — Renee "Racist and Proud" Vaughan. She's apologized — sorry she got busted. You know how apologies are. But I doubt that she'd be sorry if her trick had worked and amplified the legend of the racism of Zimmerman and his defenders.

It's entirely fitting that her name should be forever linked to the motto "Racist and Proud," because that isn't a lie. It's true. It is racist to press the racism template onto the Zimmerman story, and it is done with full intent to stimulate feelings of race-based anxiety in vulnerable minds. That is heartless and evil.


This woman is a far-Left loon who pretended to be a Zimmerman supporter at a rally. She made the sign to make people think that the pro-Zimmerman folks at the rally were racists.

She was widely identified by the press as "a George Zimmerman supporter".

This is the Left. Remember this when some leftie asshole complains about "racist" anonymous commentors, racist demonstrators, racist catcalls, etc. It is certainly possible that much of the "racism" they bleat about is fabricated by them. These people lie like they breathe. They have no qualms about lying about people who don't share their vile opinions, and no qualms about stirring up racial hatred to gain dishonest polemical ground.

Have no illusions about these people. They are utterly amoral. They are also rather clever. It's amazing what clever stratagems you can concoct whey you're unencumbered by integrity.