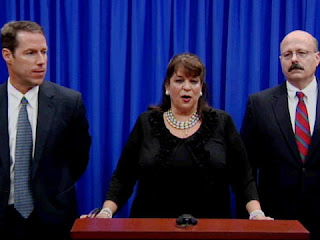 [Dissociated Press] Prosecutors for the George Zimmerman murder trial today admitted that they considered using a telegram sent by the defendant as evidence in their ultimately unsuccessful bid to convict the Florida man of murdering Trayvon Martin.

Florida State Attorney Angela Corey (above) told reporters at a press conference today that the crucial piece of evidence was rejected only after careful deliberation.

"We realized that the telegram, in which the defendant tried to incite war between Mexico and the United States, really spoke to the defendant's state of mind, and to the malice of which he was capable" Corey said to a room of stunned journalists. "If he can plan a war, he can certainly kill a black child with malice aforethought."

Prosecutors discussed the introduction of Zimmerman's telegram into evidence with presiding Judge Debra Nelson. "In consultation with the judge, we decided not to use it because we were unsure of the impact that a proposed Mexican-American war would have on the Hispanic vote in the 2014 election."

That aside, Corey did say that it was a brilliant legal strategy.

Corey told reporters "The telegram is even more convincing than the other evidence we presented at trial."