Fighting back against the Gaystapo 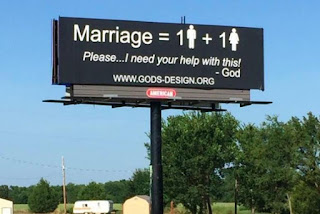 [T]he Odgaards and their Görtz Haus Gallery came under fire in 2013 when they refused to assist two men with their upcoming nuptials, citing their Christian beliefs,The Blaze reports. A small payout from the lawsuit, followed by boycotts and a decline in their accompanying flower and restaurant businesses, led the couple to close their doors at the end of July.
After their wedding business was shuttered, the couple established a nonprofit called God’s Original Design Ministry. They plan to place up to 1,000 anti–gay marriage billboards around the country. God’s Original Design Ministry is listed as a 501(c)(3) nonprofit organization, which means it doesn’t have to pay taxes on the money people send in.

Odd to ascribe hate to a couple who were minding their own business (literally) until their livelihood was destroyed by gay haters who targeted them because of their Christian faith.

The appellation "hate" must also apply to Hillary Clinton and Barack Obama, who proclaimed the same "hate" all of their lives (and campaigns), until very recently.

We're seeing the beginning of the push-back to the unconstitutional Supreme Court diktat and to the lavender totalitarians. The push-back will grow, as did the push-back to Roe, and we will see a new mass movement-- Pro-Marriage-- akin to the Pro-Live movement.

The Resistance grows.
Posted by mregnor at 6:15 PM