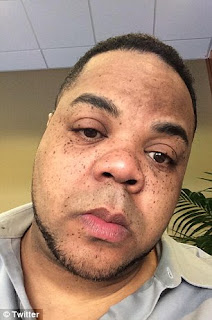 The horrendous racially-motivated murders in Roanoke of a newswoman and a cameraman leave a trail of blood that leads to the White House. These murders are only the most recent consequences of a deliberate policy by the Obama administration to inspire racial hate and violence in America.

Obama and the Left are playing with fire. They are deliberately whipping up racism and violence to advance a political agenda. There is rising violence in cities because the police have been slandered and handcuffed by Leftist lies. There are whites killing blacks and blacks killing whites in our new race war--a war started deliberately by the Democrat Left to gin up minority votes so it can retain political power.

Wherever whites and blacks are newly inspired to rob and hate and kill each other, there are Obama's sons.

The mainstream media has a lot of this blood on its hands as well--the deliberate editing of the George Zimmerman 911 audio in order to make his motives appear racial is one of the ugliest lies the leftist media had perpetrated in recent memory. The media deliberately inserted a non-existent racial motive into an audio tape for the obvious intention of stirring up racial hatred and violence. It doesn't get any lower.

The Left is rising in America. Race-baiting and violence are its oxygen. This is only the beginning.
Posted by mregnor at 10:07 AM