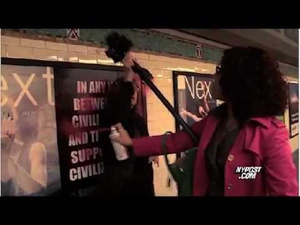 The New York Post reported Egyptian-American columnist Mona Eltahawy has been arrested for defacing an anti-Muslim ad in the New York subway system. The video shows her spraying pink paint on the ad while a supporter of the ad tries to block her. She's a journalist for censorship.

Eltahawy, a former Reuters correspondent, has been a recent favorite of CNN and MSNBC’s weekend morning shows to discuss Egypt...


The journalist-cum-jihadi defender confronted a woman who was trying to prevent her from spray-painting the poster, which says "In any war between the civilized man ad the savage, support the civilized man. Support Israel. Defeat Jihad".

Not much to argue about there.

This is the exchange between Ms. Eltahawy and a the woman protecting the poster:

“Mona, do you think you have the right to do this?” said Pamela Hall, holding a mounted camera as she tried to block the barrage of spray paint.

Hall then thrusts herself between Eltahawy’s spray paint and the poster.

Eltahawy -- an activist who has appeared on MSNBC and CNN -- engaged her in an odd cat-and-mouse dance, spraying pink every time she had an opening.

“What right do you have to violate free speech,” Hall pleaded.

“I’m not violating it. I’m making an expression on free speech,” an increasingly agitated Eltahawy shot back.

“You do not have the right!” Hall said.

“I do actually and I’m doing it right now and you should get out of the way! Do you want paint on yourself,” Eltahawy shot back.

As the poster defender bobbed and weaved to get in the paint’s way, Eltahawy mocked: “That’s right, defend racism.”

1) Spray-painting over someone else's speech is not freedom of speech. It's censorship by vandalism. Free speech is if you make your own poster.

2) Ms. Eltahawy actually doesn't even need to make her own poster, to get her opinion out. She is a CNN-MSNBC pundit and columnist (for heaven's sake). She has an audience of millions, and she could have expressed her opinion with reason and clarity. She chose spray paint.

3) The poster denounced jihadists, who are savages. Is Ms. Eltahawy angry because jihadists are being insulted? Do we need to be courteous to jihadists?

4) Ok. Ms.Eltahawy no doubt believes that "savages" and "jihadists" means all Muslims. But of course that is not at all what the sponsors of the poster have said. They denounce only jihadists. Ms. Eltahawy is the one equating jihadists with all Muslims.

5) Note to Ms. Eltahawy: Jihadis, or Islam, or whatever, aren't a race, so the poster is not racism.

The irony is delicious. Ms. Eltahawy can reach millions of viewers with her commentary, yet she chooses vandalism and censorship to express herself. And the poster she is defacing in the name of Islam denounces... savage jihadists who use uncivilized means to express themselves.