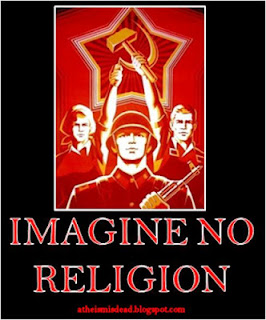 Nobel laureate and Soviet dissident Alexander Solzhenitsyn had deep personal insight into the intimate link between atheism and totalitarianism.


Over a half century ago, while I was still a child, I recall hearing a number of old people offer the following explanation for the great disasters that had befallen Russia: 'Men have forgotten God; that's why all this has happened.'

Since then I have spend well-nigh 50 years working on the history of our revolution; in the process I have read hundreds of books, collected hundreds of personal testimonies, and have already contributed eight volumes of my own toward the effort of clearing away the rubble left by that upheaval. But if I were asked today to formulate as concisely as possible the main cause of the ruinous revolution that swallowed up some 60 million of our people, I could not put it more accurately than to repeat: 'Men have forgotten God; that's why all this has happened.' [9]

Atheism in power is the most deadly ideology in human history. Nothing-- not Christian fratricide nor Islamic terrorism nor Catholic Inquisitions-- has been anywhere near as deadly and repressive as State Atheism.

The authors of The Black Book of Communism-- the definitive reference on the atrocities of communism, which is the only organized political form modern atheism has taken-- estimate that in the 20th century State Atheism murdered more than 100 million people.

The New Atheist tactic of harping on the violence of religion is not coincidental. It puts Christians on the defensive, and diverts attention from atheism-- mankind's most hellish and violent ideology.

In our public debates, we must not let atheists escape accountability for the horrors their ideology has wrought.

When you consider the totalitarian horrors of 20th century-- the gulags, the Berlin Wall, the Show Trials, the massive famine of Great Leap Forward, the indiscriminate brutality of the Cultural Revolution, the barbarism of the Killing Fields, the enduring nightmare of the 'Democratic People's Republic of Korea'-- remember Solzhenitsyn:

"Men have forgotten God; that's why all this has happened"