Salman Rushdie to Islamofascists: 'Hey, why don't you concentrate on that other guy...' 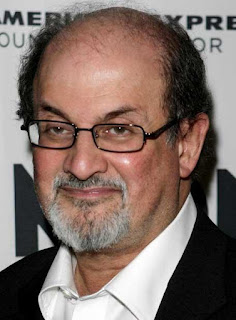 Salman Rushdie: "Actually, no, I don’t sympathize with the Mohammed filmmaker who’s now being threatened"


Rushdie green-lights the fatwa on filmmaker Nakoula Bassely Nakoula, who made the recent "Innocence of Muslims" video. As you may know, Rushdie is a leftie, so his pretense of supporting freedom of speech stops pretty much at his own skin. The sun rises, water is wet, and lefties don't really give a shit about other people's freedom.

The video-delicti obviously had nothing to do with the violence in the Arab Spring New Caliphate. The 9-11-12 murder of our ambassador and the three other Americans was a carefully planned assassination, not a spontaneous sally of indignantly righteous film critics.

The purpose of the Islamofascists in connecting the obviously premeditated terrorist attacks on our embassies with a cheesey sub-Borat video is merely to coax us a bit further toward dhimmitude. They kill our folks, and we respond by violating the constitutional rights of our folks. A jihad two-fer.

The video is quite amateurish, but it portrays the Prophet Profit as an avaricious deluded homicidal pedophile, so it has the virtue of accuracy.

Note to Rushdie: the issue is free speech, which is a fundamental human right, endowed by our Creator. I know that you, as an atheist, don't believe in our Creator, but you live under the remarkably free and tolerant Christian civilization that was built by people who do believe in our Creator. Succinctly: our Christian civilization is the only thing between you and a Religion of Peace™C4 suppository. Your low opinion of the Mohammed video, or the opinion of a Kaba-full of hypertensive Islamic jackals, or the opinion of a White-House-full of Obama Administration dhimmi, does nothing to mitigate the absolute fundamental right of the man who made the video to make the video.

It's the same absolute fundamental right-- exactly the same right-- that you had to write The Satanic Verses.

Another note to Rushdie: a Iranian religious foundation from the Religion of Peace™just upped the reward for murdering you to $3.3 million, from $2.8 million.