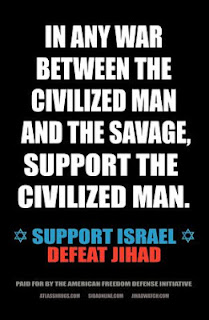 The ads-- sponsored by Pam Geller of Atlas Shrugs-- will go up shortly in the New York City subway system. A judge in NYC has overruled New York's transit authority's refusal to run the ad.

The war with Radical Islam (and it is a war) is genuinely a war between civilization and savagery. We need to tell the truth about it.

No doubt the Islamofascists will threaten and bluster, but I pray that they will not respond to free speech with violence, which would, of course, be an obvious instantiation of the point the ad is making.

Note that the poster contains no reference either to a religion or to an ethnic group. It contrasts “Israel” with “Jihad.”

Abdul Yasar, a New York subway rider who considers himself an observant Muslim, said Geller’s ad was insensitive in an unsettling climate for Muslims.

“If you don’t want to see what happened in Libya and Egypt after the video — maybe not so strong here in America — you shouldn’t put this up,” Yasar said.

So the threat is explicit. But toward whom is the ad insensitive? Jihadists, evidently. Are we really supposed to be sensitive to the feelings of jihadists?

The Metropolitan Transportation Authority in New York initially refused to run Geller’s ad, saying it was “demeaning.” But U.S. District Court Judge Paul Engelmayer ruled last month that it is protected speech under the First Amendment.

“Demeaning”? Again, demeaning toward whom? Jihadists. Are jihadists now some kind of protected class?

But aren’t they offensive only to jihadists, which is to say, mass murderers and their supporters? If you advocate mass murder, shouldn’t you expect to be offended? At a minimum?

Opponents say the ads imply that Muslims are savages.

But wait! Aren’t we constantly told that jihadists aren’t really Muslims? That Islam is staunchly opposed to terrorism? So how are all Muslims encompassed within the term “jihad”?

“We recognize the freedom of speech issues and her right to be a bigot and a racist,” said Muneer Awad, the executive director of the New York chapter of the Council on American-Islamic Relations. But he said he hopes the MTA and elected officials “take on a leadership role in denouncing hate speech.”

So now jihadists are a race? I am so confused! And does CAIR really think that denouncing jihadists constitutes “hate speech?” If jihadists can’t be denounced, then who can be?

This is the sort of confusion that is, in its own way, clarifying.


A key to fighting the Islamofascists is to name them for what they are, without fear. We must overcome political correctness and self-censorship. Totalitarians of all stripes-- Nazis, Communists, Islamists-- use reticence and fear to gain a foothold, and then strip away rights and civilization by force when they have acquired enough power through intimidation.

There is an adage (attributed to Freud, about unconscious thoughts) that demons retain their hold on us only until they are named. When we name them, they lose their power.

We need to name the jihadi savages for the demons that they are.