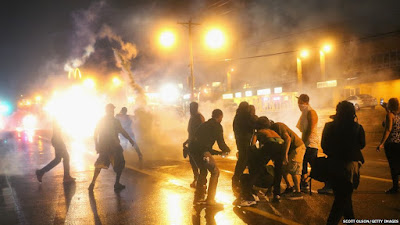 Are you still arguing that his death was justified? If so, I would really love to hear how you rationalize it. I am all ears.

My goodness, William. It's laudable that you have discovered, after a presumably long life, that there are injustices in the world--that there are incidents in which police do the wrong thing. It's a hard thing to grow up, isn't it?

We should do our best to prevent and punish misconduct. Heck, I'm the one who is in favor of enforcing laws, William, not you.

The issue here can be illustrated nicely by this analogy. Let us imagine that a bunch of elites suddenly decided to educate the public about financial crimes. To do so, they selected a certain subset of financial crime--financial crimes committed by Jews. Day after day, month after month, year after year we were treated to newscasts and opinion pieces and headlines and politicians lamenting the horrible toll financial crimes committed by Jews was taking on innocent victims. Videos of Jewish businessmen cheating and stealing from innocent non-Jews were each night on the nightly news. Riots in non-Jewish neighborhoods broke out, with rioters chanting "Non-Jewish Lives Matter".

Jews going to work were suddenly being gunned down, execution-style. Disgruntled non-Jewish journalists inspired by reports of Jewish malfeasance were sneaking up on Jewish reporters and cameramen and shooting them in cold blood.

Now of course, defenders of the Non-Jewish Lives Matter movement would say: "Hey--each and every one of these crimes committed by Jews against non-Jews is real! Jewish crime matters! There really are Jews who embezzle and steal and cheat! What are you--bigoted against non-Jews? Why do you deny their suffering?"

Now of course this isn't merely a parable. Pretty much this thing happened in Germany in the 1930's. Ordinary crimes committed by Jews were hyped, and awareness of the enormously more common crimes committed by non-Jews was suppressed. Even though specific examples cited by Nazis of Jewish corruption were sometimes real in some (limited) sense (crimes are committed by people of all faiths), the purpose and effect of the selective outrage was manifestly evil--it was a program of manipulation of public opinion in service of hate and will to power.

Cops abuse their authority, on some (rare) occasions. But the Black Lives Matter movement has nothing to do with that. The BLM movement is a political movement that uses racial hate and fear to gain power. It selects rare (very rare) examples of police action that can be labeled by some as misconduct and uses these (frequently bogus) anecdotes to gin up racial hate and violence. It is obviously supported (and likely organized) in the White House and in several of the lower recesses of the Democrat party.

It is the moral equivalent of lynch mobs inspired (by Democrats) in the early 20th century to 'protect the honor of white women' allegedly (and occasionally actually) raped by black men.

The first thing an historically informed person watching the Ferguson riots should think is not 'social justice' but 'lynch mob'.

The fact is that all lives matter. The truth matters, too. Nearly all crimes committed against black Americans are committed by other black Americans, and by Democrat libtard tools who govern and destroy black communities and who are working hand-in-hand with the new radicals in power to fundamentally transform America, and to to bring about a new and more lasting Kristallnacht.

The Black Lives Matter movement, obviously orchestrated by the White House, is a race-baiting get-out-the-vote ploy to gain political power by inciting mobs to violence.

Tools like you, William, are part of their armamentarium.