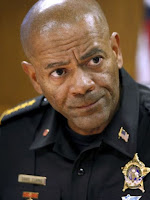 Lefty loon Ed Brayton has an astonishing post on his blog at Patheos:

... our criminal justice system is racist from top to bottom. It’s not about one man, it’s about a system where whites and blacks use, buy and sell drugs in nearly exact proportion to their percentage of the population but are arrested, convicted and imprisoned in almost exact reverse proportion. It’s about a system that targets black drivers and pedestrians at five, six, seven times the rate of whites on the grounds that they might have guns or drugs even though whites who are stopped and searched are more likely to be caught with such contraband.

It’s about a system that promises a right to counsel but makes that promise totally irrelevant in the real world by underfunding the public defender system and making it impossible for any poor person, white or black, to ever get a fair trial (or get a trial at all — 95% of all criminal cases now result in plea bargains). It’s about a system that gives prosecutors total immunity from liability or prosecution when they fabricate or withhold evidence to obtain a false conviction.

Uncle Tom sheriff? Uncle Tom? Pasty white libtard Brayton describes with an execrable racial slur a black man--Milwaukee sheriff David Clarke--who has devoted his life to ensuring the safety of black (and white) people in his city. As a law enforcement officer, Clarke has literally put his own life on the line on a daily basis to protect the citizens of Milwaukee--a large fraction of whom are black and most of whom who are innocent law-abiding people trying to protect themselves from the criminal thugs who prowl the inner city.

Brayton, a failed comedian and professional blogger whose risk at work consists of getting carpal tunnel syndrome, slurs sheriff Clarke for not being sufficiently loyal to his own race (which is the precise and entire meaning of "Uncle Tom").

Oddly, Brayton seems to think that loyalty to Clarke's black race entails sharing Brayton's liberal political views. For Brayton, a man's career devoted to protecting and serving a largely black city is not enough to prove racial fidelity--a black man must share Brayton's politics to be truly loyal to his own race.

You see of course the ugly racist echoes of Brayton's progressive Democrat heritage--Clarke has strayed off the Democrat planation, and he needs to be apprehended and whipped back into servitude. On Brayton's Democrat plantation, Brayton himself decides who works enough hours in the fields of racial loyalty.

Brayton's rant about our criminal justice system is instructive. There are indeed many faults in our criminal justice system--some innocents are persecuted and some miscreants are set free, and there is no question that blacks are far more likely to end up on the receiving end of criminal justice. This of course is largely because blacks disproportionately commit more crimes of violence, and of course blacks also suffer from a horrendous social pathology--rotting inner cities and demolished families and a toxic culture that glorifies crime and violence.

I remind Brayton of this: every one of these shithole inner cities--every one of these corrupt and bigoted and cruel criminal justice systems--are run by Ed Brayton's political clones. A whole sackful of Ed Braytons--libtard Democrats-- run Chicago and Detroit and Baltimore and St Louis and New Orleans and Washington DC.

Crime in our inner cities is committed by Democrats against Democrats in municipalities governed by Democrats. You couldn't find a Republican in any of these neighborhoods if you used a microscope.

So here's the point, Ed. You liberal scum govern the cities--all the cities--where black people suffer and languish and where criminal justice atrocities occur. You libtards own black misery and you own racism, Ed, just like you Democrat scum did for two hundred years.

If Americans want to end racism and the wholesale slaughter of blacks (mostly by other blacks) in our inner cites, stop electing Democrat assholes like Ed Brayton.
Posted by mregnor at 9:31 PM