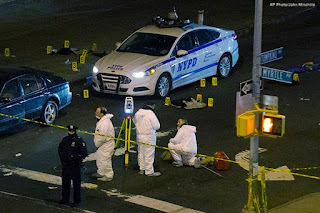 My my. Ed Brayton really steps in it.


So Much for that ‘War on Cops’ the Right is Imagining

A police officer is killed in the line of duty. Right wing pundits and talk show hosts immediately seize on the opportunity to blame it on their political enemies, claiming that President Obama and Black Lives Matter is fomenting a “war on cops” and that this is the deadly result of their attempts to make the police stop engaging in widespread abuse, particularly against dark-skinned people. The problem: The evidence clearly disproves their argument.

[quoting link] Despite urgent warnings from police and others about a “war on cops” allegedly linked to the Black Lives Matter protest movement, statistics show 2015 is in fact shaping up to be one of the safest years for law enforcement in a generation.
According to the Officer Down Memorial Page (ODMP), which keeps data on officer deaths going back over 100 years, 24 officers have been shot and killed by suspects this year. This puts the US on pace for 36 non-accidental, firearm-related police fatalities in 2015. Each one of such deaths is a tragedy for the officers killed, their families and the communities they serve, but this would be the lowest total in 25 years, aside from 2013 which saw 31 such deaths.

Let's take a look at this.

There certainly have been assaults on and killings of cops that can be linked to the anti-cop hate peddled by Black Lives Matter--the execution in December of the two NYC cops by Ismaaiyl Brinsley who put up a message on Instagram:“I’m Putting Wings on Pigs Today,” he wrote with hashtags #RIPErivGarner and #RIPMikeBrown. “They Take 1 Of Ours … Let’s Take 2 of Theirs.” And of course there was the very recent murder of police officer Don Allen, in which the killers wrote anti-police slogans in his blood. There have been several ambush attacks on police officers in the past couple of weeks. All of this is taking place in an environment of hatred vented against police officers, including public protests chanting "What do we want?-- Dead Cops!--When do we want them? Now!"and "Pigs in a blanket--fry 'em like bacon!"

There is obvious organized incitement to kill cops, and several cops have been murdered execution-style.

But Ed cites statistics that show that murder of police officers is down considerably over the past year--one of the lowest totals in many years.

The answer is obvious. Since police officers were vilified and attacked following the completely justified shooting of Michael Brown in Ferguson in 2014, police officers across the nation have been reluctant to proactively engage criminals--not only for fear of being killed, but for fear of having to use deadly force and face the liberal lynch mob.

The consequence of this police withdrawal from confrontation is evident. The murder rate in American cities has risen sharply over the past year, and this is clearly the result of a change in police tactics--a movement away from stop and frisk and away from proactive policing.

The result has been the worst slaughter of young black men in 20 years:

So in reply to Ed's moronic argument that diminished murders of police means that BLM is not killing cops: the reason cop murders are down is that cops are not doing their jobs as aggressively and as well as they have since the early 1990's. Cops are laying low, and avoiding confrontations, and the result is a massive wave of violence that is killing hundreds of young black men.

Black Live Matter has not only killed several police officers in execution-style ambushes, but it has killed hundreds of people--mostly blacks--because it has seriously hampered police from doing their job effectively.

The evidence Brayton cites to downplay the violence incited by BLM in fact points to massive violence caused by BLM against black people.

In fact, one can even do a calculus of police sacrifice to save black lives: when police were aggressively doing their jobs, more cops were dying but more black lives were being saved. The numbers show that police officers have been sacrificing their own lives to save the lives of the people in the communities they protect--mostly black communities.

The drop in murdered cops and the corresponding rise in inner city murders poignantly demonstrates the sacrifices police officers have made to protect their communities.

A lazy libtard blogger like Brayton pops his Cheetos and types away, uncaring that his idiot screeds are inciting the killing of cops execution-style and the slaughter of blacks in horrendous numbers.

All Brayton cares about is moral preening, which is all any liberal really gives a shit about.

Meanwhile, police officers--a million hard-working courageous men and women of all races--will go tonight into neighborhoods Brayton would never enter and risk their lives to save the lives of people who have been incited to hate them.

The 2015 Democrat murder wave--the slaughter of hundreds of people in inner cities, mostly young black men-- was caused by liberal scum like Brayton and Black Lives Matter.
Posted by mregnor at 7:07 PM