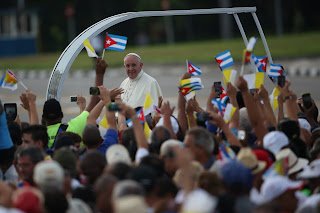 I don't agree. First, I must note that I take second place to no one in my hatred of communism. Socialism in general, and communism in particular, are raw evil, and they are the scourge of modern man. Castro(s) is a totalitarian thug, and he should be tried for crimes against humanity. I'd love to give the Cuban community in Miami a few minutes alone with the guy. He's get the justice he deserves.

That said, I think that conservatives seriously misread this Pope. Francis is not a leftist. He is an orthodox Catholic, and his teaching on economics and government and the environment are mainstream Catholic teaching, straight out of the Catechism. The content of his teaching is little different from that of St. John Paul II or Pope Benedict, or from the teachings of any of the modern popes.

Francis does provide a different emphasis, which is his privilege. Each Pope stresses the things he believes need to be stressed. And what Pope Francis is stressing-- mercy, care for the poor, care for sinners, the very real problem of gluttony (in the sense of compulsive consumption), lust for wealth and possessions, and all of the enormous dangers and evils of capitalism-- are things that really need to be stressed. Goodness, look at the filth and greed and lust for possessions that is poured on us each day by advertisers and media. It makes Sodom and Gomorrah look like a convent. We are so embedded in our culture that we often fail to see our own depravity.

Francis is right about most things--Laudato Si is a beautiful encyclical. His emphasis is nearly perfect, and he really nails the evils of opulent Western society. It is the responsibility of Catholics and all people of good will to listen to him carefully. He has much to teach humanity, and nearly all of it is good.

A couple of provisos are in order. I believe that Pope is wrong about global warming-- AGW is an obvious scientific hoax, and I'm disappointed that he doesn't see it. And I believe that Francis has not sufficiently condemned socialism, which is pure evil, as opposed to capitalism, which is concupiscence, but not evil in itself. And there is no question that capitalism has been a tremendous engine of prosperity for billions of people--it is the most successful anti-poverty program mankind has ever known, without parallel.

But capitalism has dangers just like sex and food have dangers. All are inherently good, but all can be misused in very sinful ways.I think the Pope's political heritage, which seems to be not communist nor capitalist but Peronist, influences his thinking on economics and leads him to wrongly deemphasize some of the evil of socialism.

And I do caution readers to pay attention only to what Pope Francis says and does--his actual words and actions, not to what the media says about him. The media coverage is utterly mendacious, and should be ignored.

The Pope's visit to Cuba and America is a pastoral visit, not a political visit. He is coming to care for his sheep, and the Catholics in the prison that is Cuba desperately need his guidance and inspiration, which presupposes diplomacy and tact. I hope his pastoral visit to America is similarly one of inspiration and love of Christ and our neighbor, and that the politics--particularly the distortions of the politics by the liberal media and to a lesser extent by conservatives--doesn't get in the way.
Posted by mregnor at 1:47 PM