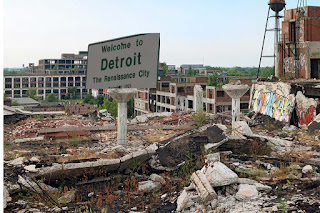 
[There's] an intriguing plan to repopulate the city of Detroit, which has lost more than a million residents from its peak. The idea: Bring in a million or so refugees from the Syrian civil war.

Detroit is Liberalism writ city-sized. The once thriving metropolis made the fatal mistake of electing liberal Democrats for a half-century, and thus committed the predictable municipal suicide. Baltimore and Chicago and Washington D.C. and Ferguson and New Orleans are lining up to quaff the same liberal kool-aid. Democrats ladle it fresh to each generation.

As wry observers have noted, Detroit would have been better off nuked than governed by liberal Democrats.

I'll leave aside the merits of importing a million new Democrat voters Syrian refugees to repopulate the carcass of a city destroyed by Democrats. Taking a liberal Democrat's advice on rebuilding Detroit is like asking Jeffrey Dahmer's advice on gay dating.

I point out to Brayton that Detroit has plenty of refugees already--a half million men, women and children, mostly black, whose lives have been decimated by liberal policies for a half-century.

We've got refugees from the Democrat war in our own cities. Let's save our own refugees first.
Posted by mregnor at 10:56 AM